The House on Thursday voted 236-181 in favor of a police reform bill conceived following nationwide protests in response to the police-involved killing of George Floyd in Minnesota.  Photo by Kevin Dietsch/UPI | License Photo

June 25 (UPI) -- House Democrats on Thursday passed a police reform bill a day after Democrats in the Senate blocked a separate policing measure introduced by Republicans.

The Democrat-led House passed the bill by a vote of 236-181, with support from three Republican lawmakers.

The bill, known as the George Floyd Justice in Policing Act, would weaken "qualified immunity" making it easier for victims of police abuse to sue officers and for officials to fire and prosecute over misconduct. It would also ban chokeholds and "no-knock" search warrants at a federal level by basing funding to state and local governments on whether those tactics are banned and would require bias training and more data sharing regarding police use of force.

Lawmakers named the measure after Geroge Floyd, a black man in Minnesota who was killed by police on Memorial day sparking nationwide protests calling for police reform as well as defunding and abolition.

"Americans from every walk of life and corner of the country have been marching, protesting and demanding that this moment of national agony become one of national action," House Speaker Nancy Pelosi, D-Calif., said. "Today, with the George Floyd Justice in Policing Act, the House is honoring his life and the lives of all killed by police brutality and pledging: never again."

The House, led by members of the Congressional Black Caucus, unveiled the bill two weeks after Floyd's death and House Republican leader Kevin McCarthy later said he agreed with some of its concepts, including the ban on chokeholds, as Republicans prepared a bill of their own.

On Wednesday, Democrats in the Senate blocked the advancement of a Republican-led police reform bill as the chamber voted 55-45 in favor of the measure but fell short of the 60 votes needed for its advance.

The bill, led by Republican Sen. Tim Scott of South Carolina, differed from the House bill by making exceptions for bans on chokeholds and no-knock warrants.

U.S. News // 4 hours ago
'If it's true we will take action,' says top U.S. general on Russian bounty reports
July 10 (UPI) -- The United States' top general told Congress that they are working to corroborate reports Russia offered the Taliban bounties to kill U.S. soldiers in Afghanistan and that they will act if the reports are confirmed. 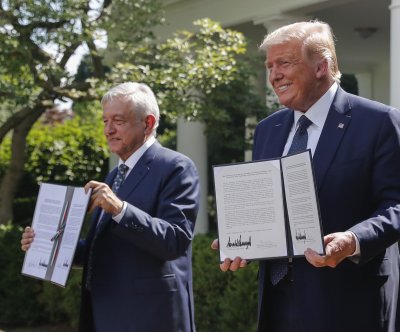 U.S. News // 8 hours ago
U.S. sanctions top Chinese officials over Uyghur abuses
July 9 (UPI) -- The Trump administration on Thursday sanctioned four Chinese government officials over allegations they are contributing to the human rights abuses being committed against Uyghur Muslims in the Xinjiang region.

U.S. News // 12 hours ago
Police interviews: Breonna Taylor's home was 'soft target'
July 9 (UPI) -- A Louisville, Ky., police officer involved in the killing of Breonna Taylor said officers knew she was likely alone in her apartment and that the suspect they were searching for was already located.