Bill Cosby gives the OK sign as his car pulls away from a courthouse in Norristown, Penn., after closing arguments in his sexual assault trial on April 24, 2018. Cosby was found guilty but the Pennsylvania Supreme Court agreed Tuesday to hear an appeal. File photo by John Angelillo/UPI | License Photo

Cosby, 82, was sentenced to three to 10 years in state prison after a jury found him guilty of sexually assaulting Andrea Constand at his home in 2004. The conviction was upheld in December by three-judge appellate panel.

But the state Supreme Court, in a brief order, agreed to consider two issues arising from the appeal, including whether the trial judge erred in allowing prosecutors to call five other accusers to back Constand's allegations.

Cosby's attorneys contend the witnesses were called to establish a "propensity" to commit a crime and improperly created an "assumption of guilt."

The high court also agreed to consider Cosby's contention that he never should have been charged due to the terms of a deal made with a former district attorney.

It declined, however, to hear two other defense arguments.

"We're extremely thankful to the State Supreme Court of Pennsylvania for agreeing to review Mr. Cosby's appeal," spokesman Andrew Wyatt said in a statement, adding that "the false conviction" of Cosby is really about "the destruction of ALL Black people and people of color in America." 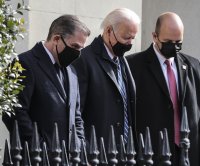 U.S. News // 14 hours ago
Tenn. inmate gets life sentence for killing prison official during escape
June 14 (UPI) -- A Tennessee inmate received a life sentence without parole Monday after pleading guilty to raping and murdering a prison administrator during an escape two years ago.