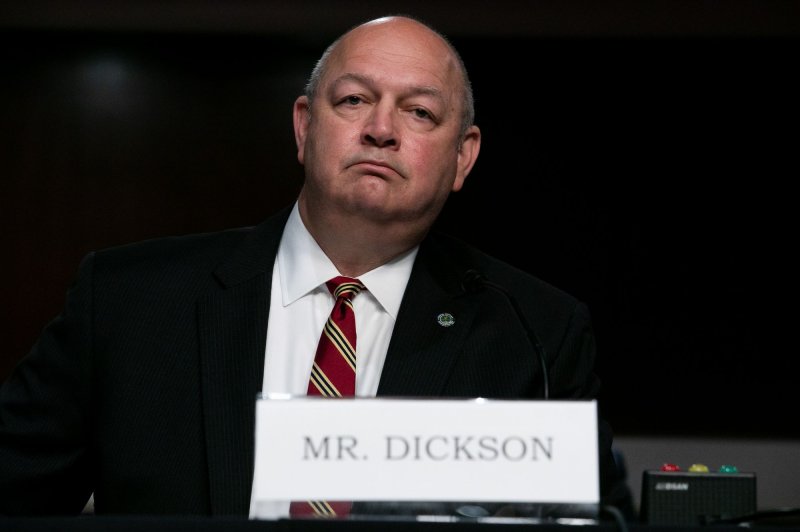 Indonesian rescuers lift recovered wheels of the crashed Lion Air Flight 610 on board a rescue ship in the Java Sea on November 4, 2018. File Photo by Fauzy Chaniago/EPA-EFE

Pieces of the wreckage of an Ethiopia Airlines Flight 302 are piled at the crash site near Bishoftu, Ethiopia, on March 13, 2019. File Photo courtesy of EPA-EFE

June 17 (UPI) -- The head of the Federal Aviation Administration acknowledged Wednesday that the agency and Boeing "made mistakes" that led to two 737 Max aircraft crashing within months of each other and killing hundreds of people.

Members of the Senate Committee on Commerce, Science and Transportation ripped into FAA Administrator Steve Dickson during a hearing examining the agency's process of certifying aircraft.

Sen. Ted Cruz, R-Texas, accused Dickson of not taking responsibility for the FAA's faults when the latter used passive voice to tell lawmakers "mistakes were made."

"So, unknown somebodies made unspecified mistakes for which there were no repercussions," Cruz said. "What mistakes were made and who made them?"

"The manufacturer made mistakes and the FAA made mistakes in its oversight. The full implications of the flight control system were not understood as design changes were made," he said.

Boeing and individual governments worldwide grounded the 737 Max in spring 2019 after the crashes occurred over the span of about six months.

Lion Air Flight 610 crashed into the Java Sea on Oct. 29, 2018, killing all 189 passengers and crew on board. The plane was en route from Jakarta to Pangkal Pinang -- both in Indonesia.

Ethiopian Airlines Flight 302 crashed months later on March 10, 2019, in Bishoftu, Ethiopia, about 6 minutes after takeoff. The crash killed all 157 on board who were en route from Addis Ababa, Ethiopia, to Nairobi, Kenya.

Aviation investigators linked both crashes to a malfunction of the planes' Maneuvering Characteristics Augmentation System, which can affect pitch in an aircraft. When pilots attempted to respond to the system, it caused them to nose dive.

Senators at Wednesday's hearing accused the FAA of stonewalling a congressional investigation into the agency's certification process.

Sen. Roger Wicker, R-Miss., said there was a "lack of responsiveness" to the panel's request for documents.

"It's hard not to conclude your team at the FAA has deliberately attempted to keep us in the dark," he told Dickson.

RELATED IATA: Airlines will lose $84B in 2020 after passenger demand 'evaporated'

Sen. Richard Blumenthal, D-Mass., said that since Dickson took control of the FAA, the "culture of secrecy ... has only been aggravated."

"The fact of the matter is that the FAA has been complicit in these crashes by failing to do more diligent oversight," he said.

The senator said the FAA should do more of the work of evaluating aircraft instead of simply overseeing as manufacturers conduct tests.

As Dickson testified, an attendee raised a sign behind him featuring photos of crash victims.

Michael Stumo, the father of Flight 302 passenger Samya Stumo, testified in the afternoon.

"The first crash should not have happened," he said. "The second crash is inexcusable.

"They gambled, we lost."