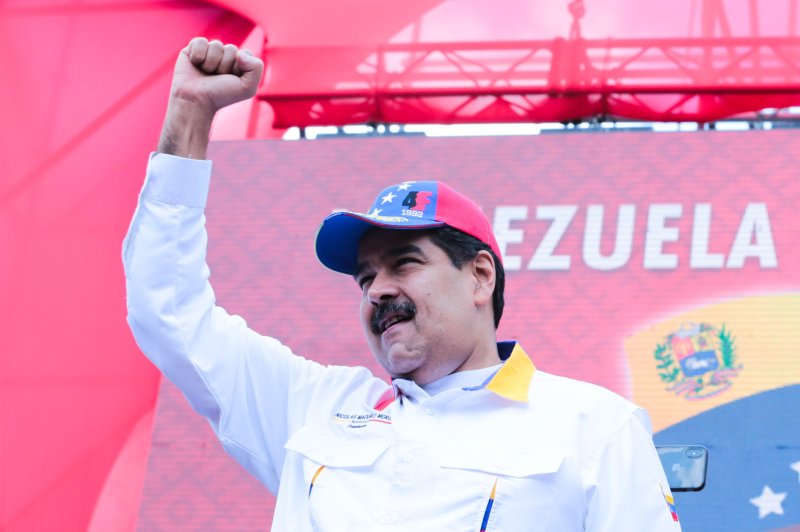 The Trump administration Tuesday announced sanctions against four oil tanker companies for doing business with the Venezuelan government led by President Nicolas Maduro, shown here at a protest in Caracas on March 23, 2019. Photo by Prensa Miraflores/EPA-EFE

The Greece-based Seacomber, which operates the Chios I, was also sanctioned.

"The illegitimate Maduro regime has enlisted the help of maritime companies and their vessels to continue the exploitation of Venezuela's natural resources for the regime's profit," Treasury Secretary Steven Mnuchin said in a statement. "The United States will continue to target those who support this corrupt regime and contribute to the suffering of the Venezuelan people."

The Trump administration started sanctioning the Maduro regime after his 2018 election, which the United States and its Western allies deemed his re-election as illegitimate. They have thrown their support behind opposition leader Juan Guaido.

In April, Trump offered to lift sanctions if Maduro and the opposition party created an interim transitional government until a free and fair presidential election could be held.

U.S. News // 6 hours ago
Arizona secures supplier for death penalty drug
March 6 (UPI) -- Arizona announced this week it's found a supplier of pentobarbital, a sedative used in lethal injections, and is prepared to resume executions after a nearly seven-year hiatus.

U.S. News // 2 hours ago
Judge rules recent ERA ratifications came too late to count
March 6 (UPI) -- A federal district judge ruled Friday that the deadline to ratify the Equal Rights Amendment "expired long ago" and that that three states' recent ratifications of the amendment do not count.

U.S. News // 10 hours ago
Judge rules Harvard owns slave images, not descendants
March 6 (UPI) -- A Massachusetts judge ruled this week that a series of slave images belong to Harvard University, but the ancestor of the subjects who were forced to strip to the waist for the photos plans to appeal.

U.S. News // 11 hours ago
Major warmup on the way for millions across the central, eastern U.S.
After multiple one-day teases of springlike warmth amidst an overall chilly end to meteorological winter, good news is in store for many fans of warm weather across the central and eastern United States.