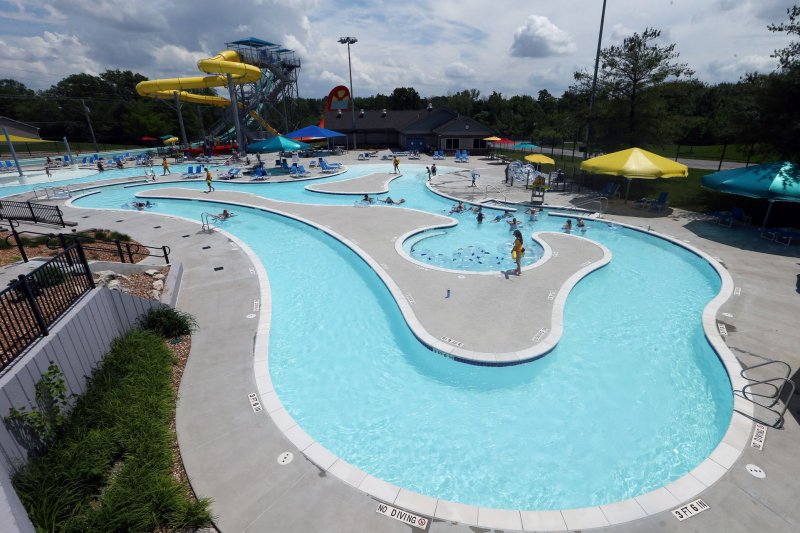 Swimmers are few at the Wapelhorst Aquatic Facility in St. Charles, Missouri on Tuesday, May 26, 2020. Only several swimming facilities in the St. Louis area have opened due to extra restrictions because of the COVID-19 pandemic. The center normally would have 1,000 swimmers on a 85 degree day. Photo by Bill Greenblatt/UPI | License Photo

May 31 (UPI) -- The same dome of heat that resulted in record-breaking temperatures across the West last week will shift eastward, bringing along summerlike conditions just in time for the start of meteorological summer.

From the central Rockies eastward to the Mississippi River Valley, temperatures ranging from 5-15 degrees Fahrenheit above average are to be expected through a majority of the week. Although millions of Americans across the nation will experience this June warmth, the core of the heat will target the Plains.

During the day on Sunday, temperatures in the 90s will sizzle portions of the High Plains. Amid the heat, there will be a localized threat of severe weather, primarily across Montana and Wyoming. Into the evening hours, remaining storms could track into places like Rapid City and the Black Hills of South Dakota.

Throughout the week, rounds of showers and thunderstorms will generally target areas along the fringes of the hot weather.

RELATED Thunderstorms to rumble around 'ring of fire' this week

While these localized showers and storms could provide a brief reprieve from the heat, air conditioning units will be working overtime across the center of the country this week.

Dodge City, Kan., will be one of many cities scorching across the Plains. The current forecast has afternoon high temperatures topping out above 90 degrees through the entire week. The city's average high through the same time frame is 82-83 degrees, suggesting that the city could experience temperatures 10-15 degrees above average.

An extended stretch of above-average temperatures can be expected in places like Denver, Kansas City, St. Louis and even into the Chicago metro area into midweek as the heat slowly shifts eastward.

On top of the scorching heat, many cities from the Plains into the Midwest will deal with very humid conditions as moisture is funneled northward out of the Gulf of Mexico. Combining these factors, AccuWeather RealFeel Temperatures® will climb even higher than what the mercury actually reads.

People spending time outdoors will want to make sure they stay properly hydrated and protected from the sun by wearing hats, sunglasses and sunscreen. If you must work outside, taking frequent breaks in the shade and drinking plenty of water or electrolyte beverages will greatly lower the risk of heat-related illnesses.

Amid the heat, remember to never leave children or pets in a sealed vehicle for any length of time. The temperature inside the vehicle can rise to lethal levels in a matter of minutes, even during the early spring months.

For portions of the Plains and mid-Mississippi Valley, this stretch of hot weather could extend through the week. Large-scale atmospheric conditions show hints of slightly lower temperatures compared to the midweek highs, but the forecast outlook looks likely that above-average warmth could continue into next week

U.S. News // 58 minutes ago
1 dead, 5 injured after shooting on Texas freeway
April 10 (UPI) -- One person died and five others were hurt in a shooting on a Fort Worth, Texas, Friday night, authorities say.

U.S. News // 10 hours ago
Temps hit 38 below zero in Alaskan city, setting new April record
April 10 (UPI) -- A historic cold blast settling into Alaska this week will send temperatures plummeting far below zero, which could topple century-old low-temperature records in one city and even a longstanding state record.