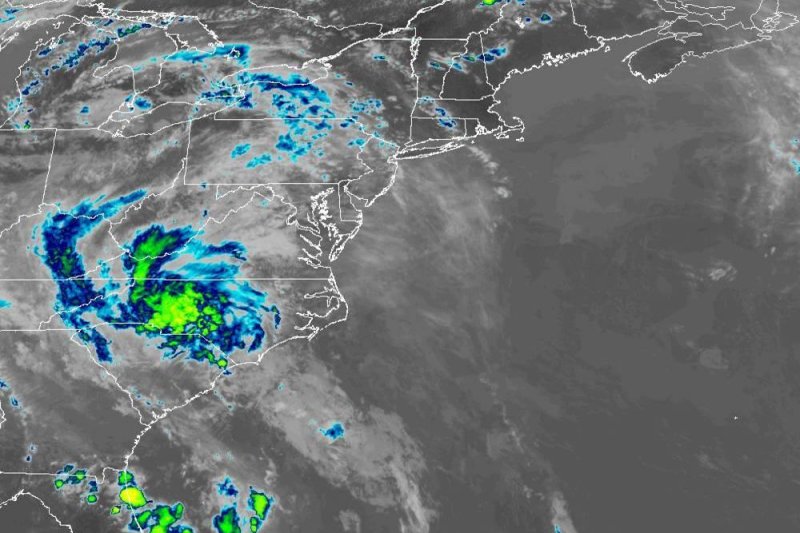 The storm will bring heavy rain, rough seas, dangerous rip currents and even coastal flooding from the upper coast of South Carolina to the coastal areas of North Carolina into Wednesday night. Image courtesy of NOAA

May 27 (UPI) -- Still days away from the official start of the 2020 Atlantic hurricane season and the Southeast coast of the U.S. on Wednesday was dealing with its second named tropical system in less than two weeks.

A disturbance that left Miami streets underwater over the Memorial Day weekend rapidly strengthened off of the South Carolina coast Tuesday night and was named Tropical Storm Bertha for several hours on Wednesday.

Unlike Tropical Storm Arthur, which flirted with the North Carolina coast on May 18 before making a right turn and heading out to sea, Bertha made landfall Wednesday on the South Carolina coast about 20 miles east of Charleston.

Satellite and radar images showed a definitive spin near the center of the system just offshore of the South Carolina coast during Wednesday morning, a sign that the tropical storm was forming. Winds offshore were sustained in the 35 mph to 40 mph range with gusts between 40 mph and 50 mph early Wednesday morning. A tropical storm has sustained winds of 39 mph or greater. Based on this, and the visible circulation, the National Hurricane Center upgraded the feature to Tropical Storm Bertha just prior to 8 a.m.

Bertha made landfall around 9:30 a.m. about 20 miles east of Charleston with maximum sustained winds of 50 mph. On the AccuWeather RealImpactScale for Hurricanes, Bertha is categorized as less than 1 with minimal impact from wind. Flooding is the greatest concern for lives and property at this point.

The feature will bring heavy rain, rough seas, dangerous rip currents and even coastal flooding from the upper coast of South Carolina to the coastal areas of North Carolina into Wednesday night.

During Wednesday afternoon and night, Bertha will weaken upon moving well inland with the center of the soon-to-be tropical rainstorm to travel northward and roughly along the Interstate 77 corridor in North Carolina and Virginia.

"Interaction with land and fast movement will be a great limiting factor with this feature, but the main impact will be a continuation of heavy rain moving forward during the middle of the week over the Carolinas then to some extent farther north over the central Appalachians from later Wednesday night to Thursday," AccuWeather chief on-air meteorologist Bernie Rayno said.

A general 1 inch to 3 inches of rain is forecast with an AccuWeather Local StormMax of 8 inches over the Carolinas and southwestern Virginia through Wednesday night.

A significant amount of this rain may fall in a matter of a few hours, especially along the coast. That intensity of rainfall can be enough to trigger flash flooding, including in cities such as Charleston and Myrtle Beach, S.C., and Fayetteville, Charlotte, Wilmington and Winston-Salem, N.C.

"The problem is this rain will fall on saturated ground from prior heavy rainfall this month, so there could be flooding problems all the way from the Carolina coast to at least southwestern Virginia and West Virginia," according to AccuWeather meteorologist Randy Adkins.

Heavy rain from Bertha can not only lead to rapid flooding of small streams and at intersections in urban areas, but also significant rises on area rivers.

West Palm Beach, Fla., shattered its daily rainfall record on Monday when 4.44 inches poured down, beating the old record of 1.14 inches set on May 25, 2018. Fort Lauderdale, Fla., also recorded a new record rainfall on Monday, with 4.03 inches, breaking the old daily record of 3.51 inches set in 1970.

Even though rainfall in the Northeast may be unremarkable in terms of amount, it could certainly spoil the summerlike weather pattern that has developed and limit the duration of sunshine. The downpours could also briefly become heavy enough to slow travel on the highways and lead to brief urban flooding in a few extreme cases over the Northeast.

Not since 2016 have there been two named tropical systems prior to the official start of hurricane season, which is June 1. During 2016, Alex formed over the central Atlantic during the middle of January, while Bonnie did not follow until late May. In 2012, there were two tropical storms, Alberto and Beryl that formed in May. These storms formed just off the southern Atlantic coast, similar to that of this May. Alberto never made landfall, like Arthur from this year. However, Beryl did move onshore, just like Bertha will soon do.

Are there any other tropical systems on deck?

AccuWeather meteorologists will continue to monitor a couple of areas in the nearby tropics for trouble into early June as well.

One area of interest will be on the western side of Central America late this week to this weekend.

"A near-coast tropical depression or storm over the Eastern Pacific could come about and pester areas from Costa Rica to Guatemala," Kottlowski said.

"It appears a broad area of slowly-spinning unsettled conditions, known as a tropical gyre, will develop around Central America over the next week or two," he explained.

This large area of disturbed weather can sometimes assist with the spin up of tropical systems on the Pacific and Atlantic sides.

"There has been some indication that a tropical system may spin up over the western Caribbean Sea to near the Yucatan Peninsula sometime during the first week of June," Kottlowski said. "But, this far out it is something we will just keep an eye on."

While waters are plenty warm in the region to support a tropical storm, there are other considerations, such as wind shear, or changing wind speeds or direction with altitude, which may prevent a disturbance from developing in the first place.

"Should multiple computer models get on board with development and those models become fairly consistent with development then we may have something to be concerned about," Kottlowski explained.

Development during June in the Atlantic basin typically occurs from the western Caribbean through the Gulf of Mexico and within a few hundred miles along the southeastern coast of the United States.

The official start of the Atlantic hurricane season is on June 1, but there has already been a tropical storm, Arthur, in the basin. Arthur formed on May 16 and a couple of days later grazed the coast of North Carolina with gusty winds, drenching rainfall and rough seas, but Arthur never made an official landfall.

Following Bertha, the next name on the list of tropical storms in the Atlantic for the 2020 season is Cristobal.

AccuWeather's long-range forecasters remained concerned for a busy Atlantic hurricane season, which includes the likelihood of several significant storms of impact on the U.S. amid the ongoing COVID-19 pandemic. Concerns for the new coronavirus were already complicating plans for hurricane shelters as officials prepared for the hurricane season ahead.

U.S. News // 16 hours ago
Ohio man's death sentence overturned under new mental illness law
Oct. 23 (UPI) -- An Ohio prisoner's death sentence has been overturned and he was resentenced to life without chance of parole in response to a new law protecting people who were severely mentally ill at the time of their crime.