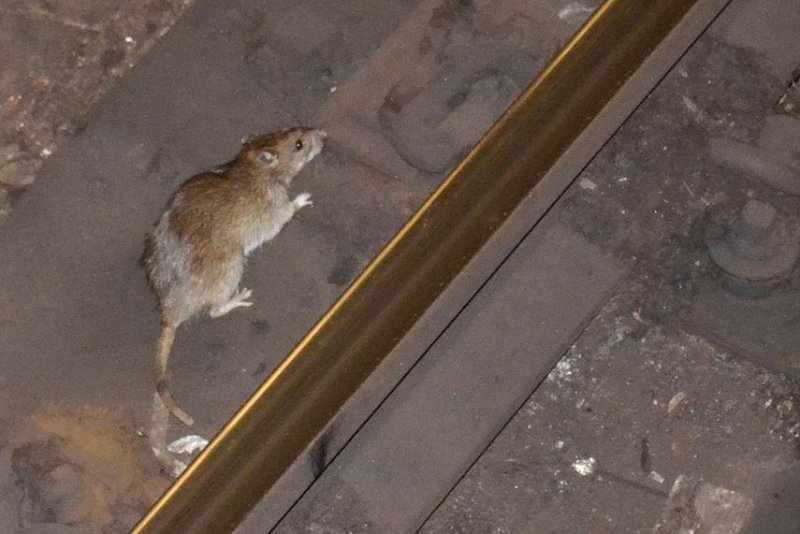 Hungry rats may exhibit "unusual or aggressive behavior" as they venture out to look for food after the pandemic-era shut-down of U.S. restaurants, the U.S. Centers for Disease Control and Prevention said Thursday. Photo by m01229/Wikimedia

May 25 (UPI) -- Federal health authorities warned that rats may exhibit "unusual or aggressive" behavior because they have been cut of from food waste due to coronavirus-related closures of restaurants nationwide.

"Some jurisdictions have reported an increase in rodent activity as rodents search for new sources of food," the U.S. Centers for Disease Control and Prevention posted on its website Thursday.

"Environmental health and rodent control programs may see an increase in service requests related to rodents and reports of unusual or aggressive rodent behavior," the agency said.

Rats can carry salmonella, and breathing dust containing rat feces or urine can cause leptospirosis, a bacterial infection, and worsen asthma symptoms, especially in children, the CDC said.

The CDC recommended that homeowners make sure they seal gaps leading into their homes and clean up possible rodent food sources like unsecured garbage or pet food left outside overnight.

"Rats can squeeze through a hole the size of a half dollar," the agency's website warns.

After natural disasters such as hurricanes, rodent populations sometimes decline, but then bounce back, the CDC said. Local environmental health agencies should be prepared to increase rat bait stations and service them more often, the agency said.

RELATED Zoo will name a rat after your ex, feed it to a snake

Rats that formerly kept to the shadows eating food from restaurant dumpsters have made brazen appearances in public in large urban centers such as New Orleans, New York and Chicago.

Disruptive food patterns have also led urban rats to seek new nesting sites, particularly in car engines of vehicles that have been not been driven because of stay-at-home orders, Car and Driver magazine reported in early May. Rats chewing through wiring can cause hundreds of dollars of damage in a car engine, the magazine said.

In Chicago, rats looking for food have been seen in the daytime, which is unusual, Robert Villamil, owner of Crow Pest Control Inc., told the Chicago Tribune in April.

"Rats have a hierarchy and they're very territorial," Villamil said. "As they look for food, people are noticing them more. Rats carry disease and they're very unsightly, so it's a big thing. People are wanting to take steps to keep rats away from their homes."

In March, as restaurants in the New Orleans French Quarter closed down, residents observed rats scurrying on Bourbon Street.

"Unfortunately, with these businesses being shut down, these rats are hungry," Claudia Riegel, executive director of the New Orleans Mosquito, Termite and Rodent Control Board, told WWL-TV.

When New York restaurants closed down in April, residents and pest control inspectors reported colonies of rats moving into new territories and resorting to cannabalism.

"They're mammals just like you and I, and so when you're really, really hungry, you're not going to act the same -- you're going to act very bad, usually," Bobby Corrigan, an urban rat expert, told NBC News. "So these rats are fighting with one another, now the adults are killing the young in the nest and cannibalizing the pups."

Jim Fredericks, chief entomologist for the National Pest Management Association, said rats that had formerly congregated near suburban strip malls were branching out seeking food in nearby subdivisions.

"As resources become scarce, whether that be food, or harborage, nesting places, that imposes stress upon that rat community, ... and when there's stress you do see increased aggressive behavior within that rat social system," Fredericks said.

U.S. News // 6 hours ago
Cardona: All schools expected to be open full time by September
May 6 (UPI) -- Education Secretary Miguel Cardona said Thursday morning he expects all schools to be fully open by the fall for the first time since the coronavirus pandemic started more than a year ago.

U.S. News // 7 hours ago
Biden's gov't aims to protect lands, waters in 'America the Beautiful' report
May 6 (UPI) -- Three departments of President Joe Biden's administration rolled out an environmental plan Thursday that aims to increase conservation for U.S. lands and waters over the next decade.