"Jackie O actually promoted him to butler," Garrett said. "Because of the relationship she was instrumental in ensuring that happened."

"He was authentic," Gay told CNN. "He was a quiet but stern man. Very giving, never fussed or complained. Always said he lived a blessed life."

Jerman left the White House in 2012 as maitre d' under Obama.

Gay told CNN that Jerman had a stroke in 2011 and Obama helped make sure he was taken care of in the hospital and sent him flowers. Obama also honored Jerman with a plaque and a coin to represent each president he served at the end of his career in the White House.

Jerman and his wife lived in Washington, D.C.'s Petworth neighborhood and had five children, 12 grandchildren and 18 great-grandchildren, Fox 5 reported. His funeral will be held virtually because of the COVID-19 pandemic.

Michelle Obama has a photo in her book, Becoming, of Jerman standing in an elevator with her and President Obama.

Since "we aren't able to grieve normally physically together" due to the coronavirus pandemic, "that [photo] is one way that we are able to still feel connected to his success and connected to so much that he promoted around authenticity and building relationships, and which equals building trust," Garrett told Fox 5.

U.S. News // 39 minutes ago
Man wearing Auschwitz shirt at Jan. 6 Capitol riot pleads guilty
Jan. 26 (UPI) -- A man photographed wearing a shirt with the phrase "Camp Auschwitz" written on it during the Jan. 6 riot at the U.S. Capitol pleaded guilty Wednesday, according to court documents. 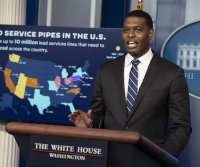