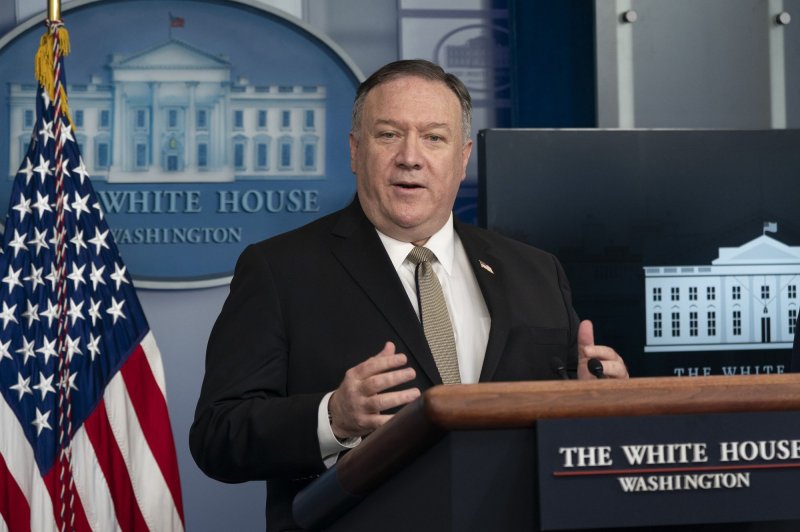 Secretary of State Mike Pompeo speaks to reporters at the White House on April 8. He is now the focus of a State Department investigation, according to news reports. Photo by Chris Kleponis/UPI | License Photo

May 18 (UPI) -- The Trump administration is under new scrutiny over the firing last week of the State Department's inspector general, as critics say it may have been a move to shield Secretary of State Mike Pompeo from potential political harm.

CNN, NBC News and USA Today report the issues involving Pompeo include efforts to fast-track a Saudi arms deal and using a staffer for personal business.

"Reports indicate that Secretary Pompeo personally made the recommendation to fire Mr. Linick and it is our understanding that he did so because the inspector general had opened an investigation into wrongdoing by Secretary Pompeo himself," the letter states.

"Such an action, transparently designed to protect Secretary Pompeo from personal accountability, would undermine the foundation of our democratic institutions and may be an illegal act of retaliation."

Reports said Linick started investigating claims that Pompeo used a staffer for personal matters, such as walking his dog, picking up dry cleaning and making dinner reservations. Linick had also nearly finished an inquiry into the decision on the Saudi arms deal.

"We don't have the full picture yet, but it's troubling that Secretary Pompeo wanted Mr. Linick pushed out before this work could be completed," Engel told CNN.

"Someone obviously has something to hide that they don't want the [inspector general] to find out about," a senior department official told USA Today.

Stephen J. Akard, a former aide to Vice President Mike Pence while he was governor of Indiana, replaced Linick as State inspector general.