Tropical Storm Arthur is seen moving away from the U.S. East Coast early Tuesday after it flirted with North Carolina's Outer Banks and brought heavy rain and strong winds. Image courtesy of NOAA

May 19 (UPI) -- Arthur, the first named tropical system of the 2020 Atlantic hurricane season, was moving away from the North Carolina coast on Tuesday.

As of 5 a.m. EDT, the storm's center was moving east at 15 mph, a substantial increase from its plodding forward thrust of 7-8 mph on Sunday. The storm's sustained winds remained around 60 mph.

On Monday, Arthur's center reached within 20 miles of the easternmost part of the Outer Banks. By early Tuesday, it was about 300 miles from that point.

The storm unleashed heavy rain and gusty winds across the eastern part of the state while generating dangerous surf conditions and rip currents. Wind gusts near 50 mph with waves up to 12.5 feet were reported, according to data provided from a buoy located southeast of Cape Hatteras.

A compilation of webcam footage from Monday showed wind-whipped rain and turbulent seas in the area.

AccuWeather's top hurricane forecaster, Dan Kottlowski, said that although Arthur remains a weak tropical storm, it will continue to generate a large area of moderate to heavy rain over eastern North Carolina. Rain first moved into the area Sunday night.

"Rough seas and gusty winds will expand northward to the upper mid-Atlantic coast through Tuesday as the storm drifts eastward and perhaps stalls over the open water," AccuWeather meteorologist Renee Duff said.

The timing of Arthur coincided with North Carolina's first phase of a reopening strategy amid the coronavirus pandemic. Many areas experiencing the brunt of Arthur's rain and wind, including Hatteras and Ocracoke islands, recently reopened to vacationers following mandatory closures due to the outbreak of the virus. Bars, restaurants and gyms remain closed throughout Dare County, and personal gatherings over 10 people remain prohibited.

The arrival of Arthur continued a trend of preseason development in recent years. There has been a named storm system before June 1, the official start of hurricane season, every year since 2015.

Arthur is expected to head out to sea and shed its tropical characteristics.

"The non-tropical version of Arthur could still remain a well-defined storm system into Wednesday, but it should weaken as it passes near or over Bermuda on Thursday morning," Kottlowski said.

AccuWeather meteorologists say there is no other organized tropical system in the Atlantic and any new development is not expected through at least early next week. 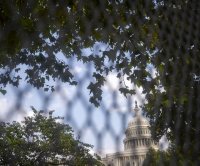