By
Patrick Svitek, The Texas Tribune

May 7 (UPI) -- Gov. Greg Abbott met Thursday with President Donald Trump in the White House to discuss Texas' response to the coronavirus pandemic as the state moves forward with restarting its economy.

Speaking with reporters in the Oval Office, Abbott touted the state's ability to reopen while still responding to flare-ups in certain places. He also promoted the action he took hours earlier that prevents Texans from being jailed for violating his executive orders. That decision was prompted by the case of Shelley Luther, a Dallas hair salon owner who was jailed earlier this week for illegally reopening her business. She was freed as Abbott was at the White House.

"We should not be taking these people and put them behind bars," Abbott said. "That is wrong, and that is why I issued another executive order today saying that in the state of Texas, no one can be put behind bars because they're not following an executive order. It's common sense."

"That includes the woman that we've been reading about with the beauty salon?" Trump asked.

RELATED NIH chief: Millions of COVID-19 tests will be available in U.S. within months

Trump has been complimentary of Abbott's leadership during the pandemic, most recently of the governor's efforts to restore the Texas economy. The next phase of that process begins Friday, when Abbott is allowing barbershops and salons to reopen under certain restrictions.

RELATED California projects record $54B deficit due to COVID-19 shutdown

"Gov. Abbott, when you look at the job he's done in Texas, I rely on his judgment," Trump said.

While discussing the reopening process with Trump, Abbott repeatedly pointed to the state's new "surge response teams," which are tasked with addressing flare-ups locally going forward. Abbott noted that most of the high concentrations of cases have been occurring at meatpacking plants, jails and senior centers, "and if it weren't for those three categories, the people in Texas testing positive would be very minimal."

"It's like putting out a fire," Abbott said of the work that the surge response teams are doing.

Abbott said Texas has "learned so much [over] the past few months" about combatting the virus.

"We now have all these strategies to make sure that we are able to contain any type of outbreak, and that allows the rest of the economy of big states like Texas to continue to go and grow while we manage and contain the outbreaks where they exist," Abbott said.

The meeting including Dr. Deborah Birx, the White House coronavirus response coordinator, whom Abbott regularly cites in defending his reopening efforts. Asked about Texas' plans, she said she has remained in touch with Abbott, and in one instance, they had a "long discussion" about not including nail salons in his first round of business reopenings "because you can't really physical distance."

RELATED Prior COVID-19 diagnosis a disqualification for U.S. military service

"We had that discussion, and he agreed, and we moved forward together," Birx said.

Asked if Texas was a role model for other states, Birx replied, "Every state is different, so I don't want to get in comparison with the governors because I talk to some incredible governors who are all doing quite a good job."

The meeting came as the number of coronavirus cases in Texas rose to at least 35,390, with 973 deaths, according to the latest numbers from the Texas Department of State Health Services. Eighty-five percent of Texas' 254 counties -- 217 -- are reporting cases.

There have been 455,162 tests conducted in the state, according to the latest figures. While the daily number of tests has been on an upward trend, the tally is still not hitting Abbott's own target, which is at least 25,000 per day.

Democrats have argued that Abbott is moving too quickly to reopen the economy, a point they reiterated ahead of his meeting with Trump.

"From a lack of testing at the federal and state level to reopening businesses before health experts say it is safe to open, Trump and Abbott have both mismanaged the coronavirus crisis," Texas Democratic Party spokesperson Abhi Rahman said in a statement. "Abbott is Donald Trump without the showmanship."

U.S. News // 3 hours ago
Debates commission to change structure after Tuesday night chaos
Sept. 30 (UPI) -- The organization that sets the procedures for presidential debates announced Wednesday that it plans to re-structure the events going forward after the chaos and verbal sparring of the night before.

U.S. News // 5 hours ago
Astronauts close to finding source of air leak at Int'l Space Station
Sept. 30 (UPI) -- NASA says astronauts on the International Space Station have found a small air leak that had been growing in size. 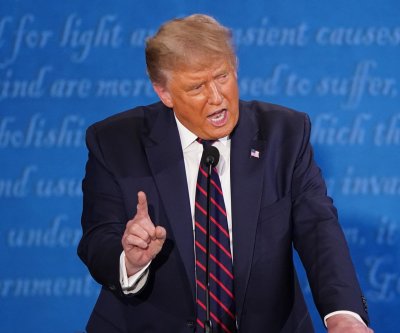 U.S. News // 6 hours ago
Trump to campaign in battleground Minnesota on Wednesday
Sept. 30 (UPI) -- After his debate performance in Cleveland, President Donald Trump is scheduled to stage a campaign rally Wednesday in the battleground state of Minnesota.