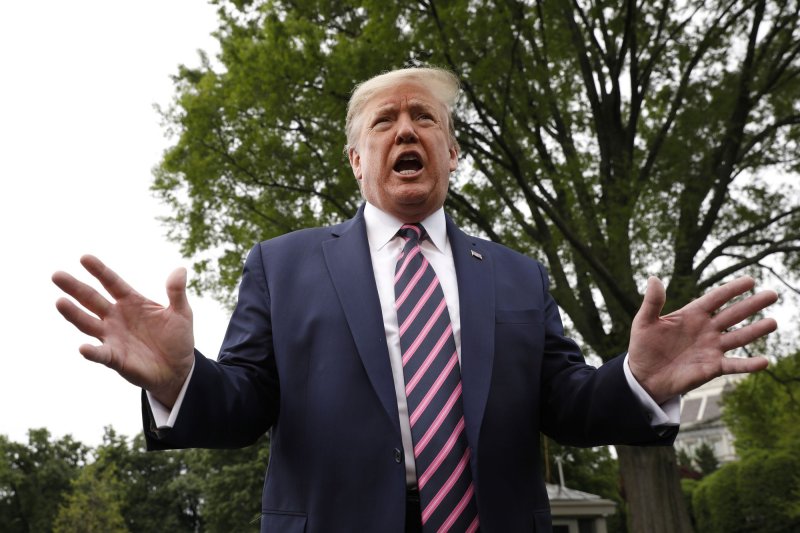 U.S. President Donald Trump speaks to the media on the South Lawn of the White House in Washington, D.C., before his departure to Phoenix, Arizona on Tuesday. Photo by Yuri Gripas/UPI | License Photo

Venezuela said it has captured former U.S. special forces soldiers Airan Berry and Luke Denman after thwarting an invasion of "mercenaries" on Sunday, blaming adversaries Colombia and the United States for the operation.

Trump told reporters Tuesday he was recently informed of the incident and that it has nothing to do with the United States.

"We just heard about it. But whatever it is, we'll let you know," he said. "But it has nothing to do with our government."

Secretary of Defense Mark T. Esper echoed Trump during a briefing on Tuesday, stating "the United States had nothing to do with what has happened in Venezuela."

Meanwhile, the State Department also accused the regime of embattled Venezuelan President Nicolas Maduro in a statement of conducting "a major disinformation campaign" that is "making it difficult to separate facts from propaganda."

Maduro said during a televised address Monday night that the two Americans were among a group of "terrorists" who were captured before they could assassinate him. Venezuelan officials said eight people were also killed.

Jordan Goudreau, an ex-Green Beret and owner of private security company Slivercorp USA for which the two captured Americans worked for, has claimed responsibility for "Operation Gideon," a plan of insurrection against Maduro he said is connected to Venezuelan opposition leader Juan Guaido, who has the support of the United States and more than 50 countries.

Guaido accused Maduro on Tuesday during a virtual session of the National Assembly of conducting a "massacre."

"Nicolas Maduro, you are responsible," he said. "They knew about this operation, they infiltrated them and waited for them to massacre them."

"They want to make invisible the lack of gasoline, the struggle of hundreds of thousands of Venezuelans," he said.

The United States has been applying pressure to force Maduro to step down since his re-election was deemed illegitimate early last year and has backed Guaido as interim president until new democratic elections can be held.

U.S. News // 1 hour ago
Buffalo, N.Y., to hold final funeral in grocery store shooting
May 28 (UPI) -- Family members on Saturday plan to lay to rest Ruth Whitfield, the oldest victim of a mass shooting at a Buffalo, N.Y., supermarket earlier this month, with Vice President Kamala Harris expected to be in attendance.

U.S. News // 10 hours ago
Trump, Cruz and Abbott speak against gun control at NRA conference
May 27 (UPI) -- Former President Donald Trump and Sen. Ted Cruz spoke against gun control measures at a conference for the National Rifle Association held in Texas on Friday in the aftermath of the Uvalde elementary school shooting.

U.S. News // 14 hours ago
Texas Gov. Abbott says he was 'misled' on police response to Uvalde shooting
May 27 (UPI) -- Texas Gov. Greg Abbott on Friday said he was "misled" about the police response to the Uvalde elementary school shooting days after praising the response of law enforcement.

U.S. News // 15 hours ago
Jury enters deliberations in Johnny Depp, Amber Heard case
May 27 (UPI) -- A Fairfax County, Va., jury began deliberations Friday in the defamation trial between actors Johnny Depp and Amber Heard after about six weeks of testimony and accusations of abuse from both.

U.S. News // 16 hours ago
U.S. stocks break losing streaks for best week since 2020
May 27 (UPI) -- The three major stock indexes in the United States made gains this week, rebounding some from weeks of losses for the best week since November 2020.

U.S. News // 17 hours ago
JFK's 'eternal flame' persists even amid inclement weather
On a November day in 1963, Jacqueline Kennedy stood before the coffin of her late husband, lighting a torch at the head of the grave with the intention of the flame being an eternal symbol of John F. Kennedy's spirit.

U.S. News // 1 day ago
Texas official: Waiting to engage school shooter was 'wrong decision'
May 27 (UPI) -- Texas' top law enforcement officer said Friday that police made the "wrong decision" not to immediately breach the classroom where a gunman had barricaded himself and killed 21 people.
Advertisement