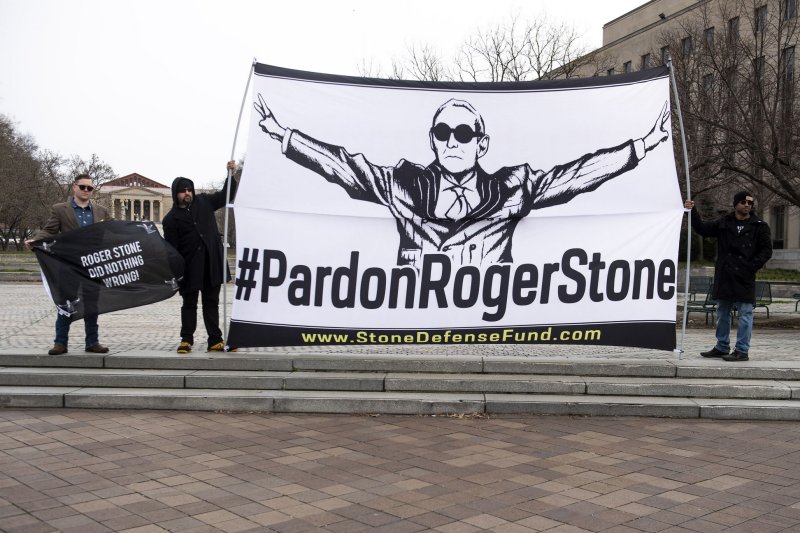 Supporters of Roger Stone stand outside a Washington, D.C., courthouse on February 20 on the day the political strategist was sentenced to 40 months in prison. File Photo by Kevin Dietsch/UPI | License Photo

The two-page notice Thursday didn't state the reasoning for the appeal and said only that his attorneys will pursue a change to his conviction, which will likely be heard in the U.S. Court of Appeals for Washington, D.C.

Stone was given a 40-month prison sentence in February.

In a Facebook video Wednesday, Stone slammed prosecutors and called his case a "witch hunt." He said the charge of lying to Congress was fabricated and that prosecutors have no evidence to support any of the accusations.

Earlier this week, the FBI released an application from a search warrant from 2017 that details messages Stone exchanged with WikiLeaks co-founder Julian Assange during the 2016 U.S. presidential campaign.

Stone said the documents prove his innocence and bolster his case. President Donald Trump complained in a tweet Thursday that his former political ally had been mistreated.

U.S. News // 9 minutes ago
'Sophisticated' hack of IT servers targets airlines' passenger data
March 5 (UPI) -- A "sophisticated" cyberattack targeting an information systems manager that handles 90% of the aviation industry has compromised the personal data of hundreds of thousands of passengers around the world, officials say.

U.S. News // 12 hours ago
Body, motorcycle found 456 feet below Grand Canyon rim
March 4 (UPI) -- The National Park Service said Thursday that Park Rangers had recovered the body of a missing Kentucky man in the Grand Canyon, bringing an end to a multi-day search and rescue operation.