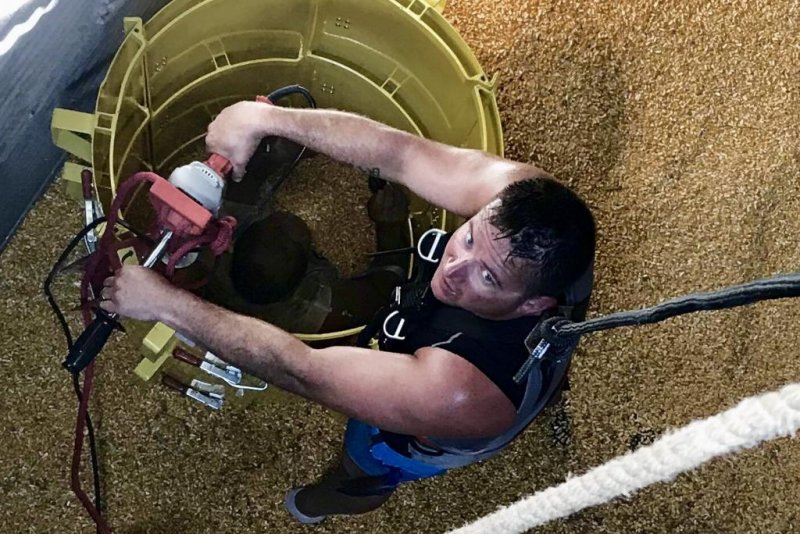 Thirty-nine people died in grain bin accidents in 2019, according to Purdue University. Photo courtesy of the Burlington (Iowa) Fire Department

EVANSVILLE, Ind., April 9 (UPI) -- The number of farmers and workers who died in grain bins spiked in 2019, according to researchers at Purdue University. And safety experts expect those numbers to remain high this year.

Thirty-nine people died in grain bin accidents last year, up from 27 in 2018, according to Purdue University's Agricultural Safety and Health Program.

The spike related to the quality of the 2019 corn and soybean crop, said Bill Field, an extension safety specialist at Purdue, who heads a team that tracks grain bin accidents annually.

Due to flooding and other adverse weather issues last year, crops across the Midwest were harvested while still wet. Wet grain tends to clump together in bins, Field said.

"You can think about it like sand in an hourglass," Field said. "Normally, the sand will flow right through the hourglass. But, if you add a couple drops of water, it will clump up and it won't flow through the hole. The same thing happens with corn."

So, when it's time to empty the bin -- which is done through a small opening at the bottom of the structure -- the grain becomes stuck. That forces farmers or workers to enter the bin and break it up.

Once in the bin, a person can be quickly pulled into the grain and suffocate.

Corn and soybeans are generally harvested in the fall, and large amounts then are stored in bins on farms to be sold throughout the upcoming year. The number of accidents started to rise as farmers began to store their 2019 harvests.

"In the latter part of the year, we started having more of these accidents," said Jeff Adkisson, executive vice president of the Grain and Feed Association of Illinois and a board member on the Grain Bin Safety Council, also based in Illinois.

"We're concerned we're going to see another spike in fatalities in 2020 because that crop is still being stored," Adkisson said.

At least seven people have died in grain bins so far this year.

Though they're not required, the Grain Bin Safety Council recommends that farmers follow some of the same standards, like never working alone, wearing a safety harness and not going into a bin while the equipment that pulls grain from the bin is running.

"If they just don't go in while the equipment is running, that would probably have saved a lot of lives over the years," Adkisson said.

Adkisson's final piece of advice is for farmers to call their local grain elevator for help.

"We know farmers are fiercely independent," he said. "And we know it might be a little embarrassing to admit you're having problems with your grain.

"But, we'd rather have a farmer come to us a little embarrassed than have to go to that farmer's funeral."

U.S. News // 16 hours ago
Minneapolis leaders vote in favor of police reforms; ban choke holds
June 5 (UPI) -- The Minneapolis City Council voted Friday on a measure that bans police from using choke holds and other neck restraints in response to the death of George Floyd and national civil unrest.

U.S. News // 22 hours ago
George Floyd protests: D.C. expects major rally; Buffalo officers suspended
June 5 (UPI) -- Multiple demonstrations are planned in Washington, D.C., and throughout the U.S. this weekend as the movement against police brutality in the wake of George Floyd's death nears its third week.

U.S. News // 12 hours ago
Experts: COVID-19 has increased risks, costs for November election
June 5 (UPI) -- The election in November faces an increased threat of cyberattack as a result of the coronavirus pandemic and officials need to tighten security, experts said in a report Friday.