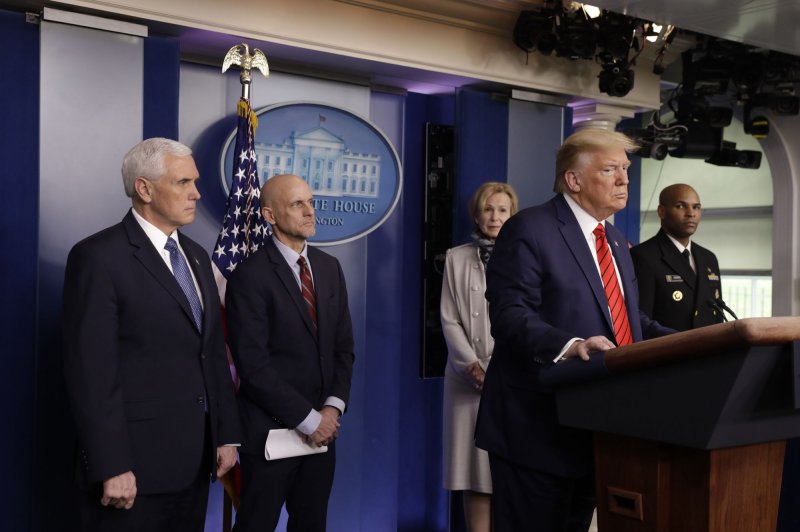 President Donald Trump gives an update Thursday from the White House on the federal response to the coronavirus disease. Photo by Yuri Gripas/UPI | License Photo

March 19 (UPI) -- President Donald Trump said Thursday U.S. regulators are looking at utilizing therapies that are still in the testing phase and some already approved for other uses, like malaria, in the fight against coronavirus.

In a briefing at the White House, Trump ordered the Food and Drug Administration to look into making the treatments -- which include the generic malaria drug hydroxychloroquine and the antiviral medication remdesivir -- available to the public.

FDA Commissioner Stephen Hahn said the agency is seeking to fast-track hydroxychloroquine for use in coronavirus patients, while working with drugmaker Gilead in setting up protocols for a large remdesivir trial.

Clinical data could also be collected by doctors using the drug in compassionate care cases, he said.

Trump praised Hahn for "removing barriers" and voiced confidence the United States will beat the coronavirus pandemic, which he again called "the Chinese virus," a term that's angered the government in Beijing.

Vice President Mike Pence said shortages of medical equipment are quickly being addressed. He said as many as 35 million new industrial face masks by 3M are now available to the healthcare sector after liability laws were changed this week.

Pence also said tens of thousands of critical ventilators can be modified for medical uses.

Trump and Pence spoke to governors from the Federal Emergency Management Agency headquarters where the vice president said the agency would take the lead in the government's national response to the virus.

"Our nation's response, through FEMA, will be locally executed, state-managed and federally supported," Pence said.

RELATED Esper: Pentagon to give masks, ventilators to HHS

The governors of Georgia and New Jersey asked Trump to provide the states with block grants, in which the federal government would provide funds to local authorities to then allocate on their own, which Trump said he would consider.

Trump had previously instructed states to seek supplies to combat the virus on their own as much as possible, but Massachusetts Gov. Charlie Baker said his state lost out to the federal government in its attempts to gather resources.

"We took very seriously the push that you made previously on one of those calls that we should not just rely on the stockpile and that we should go out and buy stuff and put in orders and try to create pressure on manufacturers and distributors," he said. "And I've got to tell you that on three big orders, we lost to the fed."

Trump responded by praising Baker's efforts and suggesting price may have played a factor in the federal government receiving resources.

"We do like you going out seeing what you can get, if you can get it faster and prices are always a component of that also. And maybe that's why you lost to the feds, I'll tell you that's probably why," he said.

The legislation provides as many as 10 days of paid sick leave for some workers, enhanced unemployment insurance and free coronavirus testing. It also contains protections for frontline workers, increased federal funds for Medicaid and more than $1 billion to strengthen food security initiatives.

The White House is working with Congress to finalize a $1 trillion package, which includes stimulus payments to most Americans.