Traders work on the the floor of the New York Stock Exchange Tuesday at the opening bell on Wall Street in New York City. Photo by John Angelillo/UPI | License Photo

March 18 (UPI) -- A day after posting major gains on Wall Street following the Trump administration's robust stimulus proposal, U.S. indexes slid into the negative at the end of trading Wednesday.

The Dow Jones Industrial Average closed down 1,338.39 or 6.3 percent, to 19,898.92, its first close below 20,000 since February 2017. An emergency circuit breaker halting trading for 15 minutes went into effect for the fourth time in a week on Wednesday after stocks fell early in the day.

The S&P 500 fell 5.18 percent down 30 percent from a record set last month, while the Nasdaq Composite slid 4.7 percent, erasing the previous day's gains.

Tuesday, the Dow gained more than 1,000 after the administration announced planned stimulus to help address the coronavirus outbreak.

Tom Essaye, founder of The Sevens Report, said the volatility in the market is not yet over and said the market changes await events such as final approval of the stimulus package.

"We also need to see more progress on the pharma side of things and above all else we need the growth rate of the virus to peak in the coming weeks," Essaye said.

U.S. oil prices plunged to an 18-year low in futures trading by the time the markets closed.

"Oil is by far one of the biggest casualties from the novel coronavirus outbreak," FXTM senior research analyst Lukman Otunuga said. "WTI crude and Brent have both depreciated a staggering 60 percent since the start of 2020 and could extend losses as the pandemic darkens the outlook for fuel demand."

West Texas Intermediate crude for April delivery was down to $24.55 per barrel -- its lowest level since April 2003. Brent crude slid more than 4 percent to $27.46 per barrel, a four-year low.

In addition to travel and social lockdowns worldwide, falling oil prices have resulted from Saudi Arabia and Russia declining to end their price war, which has flooded the market with supply.

Goldman Sachs on Wednesday projected Brent crude will fall to as low as $20 per barrel in the second quarter, which would be its lowest level in nearly 20 years.

"We have been informed that a member of the trading floor community and a NYSE employee have tested positive for COVID-19," NYSE Chief Operating Officer Michael Blaugrund said. "Both individuals were screened at the NYSE security checkpoint, administered a test by medical personnel at the Exchange and, as a precautionary measure, not permitted to enter the building this week. They will be treated and recuperate away from the exchange facility."

While the NYSE said it had been taking action including practicing social distancing to prevent the spread of the virus, Cunningham reiterated her stance that trading should not shut down entirely as markets have plummetted due to the outbreak.

"While we are taking the precautionary step of closing the trading floors, we continue to firmly believe the markets should remain open and accessible to investors," she said. "All NYSE markets will continue to operate under normal trading hours despite the closure of the trading floors."

U.S. News // 19 hours ago
As many as 99 missing, 1 killed in Miami-area condo collapse
June 24 (UPI) -- At least one person was killed and as many as 99 were missing Thursday after about half of the units in a high-rise oceanfront condominium building near Miami Beach collapsed overnight.

U.S. News // 18 hours ago
Teamsters vote to make helping Amazon workers unionize a priority
June 24 (UPI) -- The International Brotherhood of Teamsters voted Thursday in favor of a plan to support unionization efforts for Amazon warehouse workers and drivers in the United States. 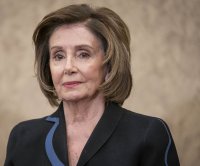