A new U.S. bill would tighten restrictions on imports from the regions over concerns regarding forced labor particularly involving members of the Muslim Uyghur and Kazakh minorities.  Photo by Stephen Shaver/UPI | License Photo

A bipartisan group of lawmakers including six Democrats and five Republicans in the House and one Republican and two Democrats in the Senate introduced the legislation following a series of studies and reports documenting how inhabitants of Xinjiang, particularly members of the Muslim Uyghur and Kazakh minorities, have been recruited into forced labor.

Import of goods made under forced labor are prohibited under U.S. law but the bill would make it so that only goods from Xinjiang with "clear and convincing evidence" showing they did not involve forced labor would be permitted to be imported.

The bill would require businesses to provide evidence that each item it produces had an untainted chain of production.

It also calls on President Donald Trump to impose sanctions on Chinese officials or businessmen who knowingly engage in forced labor practices.

A report from the Congressional-Executive Commission on China that accompanied the release of the bill said that the global supply chains are "increasingly at risk of being tainted with goods and products made with forced labor" from Xinjiang and recommended a comprehensive import ban on goods from the region.

The report noted that brands such as Nike, H&M, Espirit, Addidas and Calvin Klein may have been at least partially sourced from forced labor facilities in Xinjiang.

"Forced labor exists both within the system of mass internment camps and throughout the region and is confirmed by the testimony of former camp detainees, satellite imagery and recently leaked Chinese government documents," the report stated.

RELATED Pepsi to acquire energy drink giant Rockstar for $3.8B 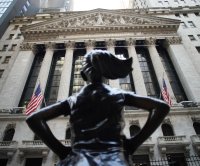 U.S. News // 6 hours ago
Ex-cop Derek Chauvin chooses not to testify in trial for George Floyd's death
April 15 (UPI) -- Defense attorneys in the criminal trial of former Minneapolis police officer Derek Chauvin rested on Thursday, without Chauvin taking the stand to defend himself against charges over the death of George Floyd last year.

U.S. News // 7 hours ago
Capitol Police IG says dept. needs reform, culture change after Jan. 6 attack
April 15 (UPI) -- Officers were not prepared to deal with the mob that attacked the U.S. Capitol on Jan. 6, despite warnings of potential violence, according to congressional testimony from the Capitol Police inspector general.

U.S. News // 7 hours ago
Disneyland begins selling tickets for park's reopening this month
April 15 (UPI) -- Disneyland is still a couple weeks away from its grand reopening, but tickets to return to the family resort for the first time in more than a year went on sale Thursday.

U.S. News // 7 hours ago
Retail sales in U.S. surge by 10% in March; jobless claims way down
April 15 (UPI) -- Americans appear to have used some of their stimulus cash at retail outlets last month, as sales nationwide surged by an explosive 10%, according to government figures Thursday.