"Bottom line, it's going to get worse," Dr. Anthony Fauci, director of the National Institute of Allergy and Infectious Diseases, told lawmakers Wednesday.

March 11 (UPI) -- As the number of community-spread cases of COVID-19 grows in the United States, local and state officials will bear more of the burden of combating the virus, a federal health official told Congress on Wednesday.

Dr. Robert Redfield, director of the U.S. Centers for Disease Control and Prevention, said the role of local agencies is becoming more important as more states report cases. He made the remarks during a hearing of the House Committee on Oversight and Government Reform.

"As we experience the growing community spread in the United States, the burden of confronting this outbreak is shifting to states and local health professionals on the front lines," he said.

Redfield revealed that 31 people have died from the coronavirus in the United States, up from the 29 the CDC reported earlier Wednesday.

Johns Hopkins University has reported more than 1,281 cases and 36deaths in the United States as of Wednesday afternoon. Most of the deaths --23 -- are in Washington, with two each in California and Florida, and one each in New Jersey and South Dakota.

Redfield said healthcare facilities across the country have the ability to test as many as 75,000 people for the virus.

Also speaking at the hearing, Dr. Anthony Fauci, director of the National Institute of Allergy and Infectious Diseases, again warned that the spread of the virus is likely to get worse.

"I can say we will see more cases, and things will get worse than they are right now," he told the panel, echoing remarks from U.S. Surgeon General Jerome Adams a day earlier. "How much worse we'll get will depend on our ability to do two things: to contain the influx of people who are infected coming from the outside, and the ability to contain and mitigate within our own country.

"Bottom line, it's going to get worse."

Fauci said Americans shouldn't assume that the virus will subside as the weather becomes warmer, as does often happen with the flu. He and Redfield encouraged communities and individuals to become more active in preventing the further spread of coronavirus.

School districts across the United States have canceled extracurricular activities and even temporarily shuttered some schools. Some universities are sending students home and other large gatherings such as concerts and conventions have been canceled. In New York, Gov. Andrew Cuomo has mobilized the National Guard to create a two-week "containment zone" in New Rochelle, where more than 170 have tested positive for COVID-19.

Some health facilities are offering drive-up testing to limit the number of infected people entering busy emergency rooms and clinics.

"We must be much more serious as a country about what we might expect," Fauci added. "We cannot look at it and say, 'Well, there are only a couple of cases here, that's good.' Because a couple of cases today are going to be many, many cases tomorrow."

Rep. Carolyn Maloney and Rep. Jamie Raskin, chairs of the committees of oversight and reform and civil rights and civil liberties respectively, sent a letter on Wednesday to the Department of Homeland Security requesting information on its plans to prevent and respond to an outbreak of the virus in Immigration and Customs Enforcement and Customs and Border Patrol migrant detention facilities.

Maloney and Raskin said that DHS detention facilities are "especially vulnerable" to the spread of coronavirus, stating the Trump administration's immigration policies have led to overcrowding.

"Overcrowding creates dangerous conditions that increase the likelihood that disease will spread and make it more difficult to effectively quarantine contagious detainees," they wrote.

After the conclusion of Wednesday's congressional hearing, the World Health Organization declared the coronavirus outbreak a global pandemic, with more than 118,000 cases in 114 countries and a death toll of more than 4,300.

Late Wednesday, the Pentagon announced new travel restrictions for service members, DoD civilians and families to and from locations the CDC has designated as Level 3 that urges American citizens to avoid non-essential travel. The 60-day restriction will be effective as of Friday.

The State Department on Wednesday also issued a Global Level 3 Health Advisory, advising U.S. citizens "to reconsider travel abroad due to the global impact of COVID-19." 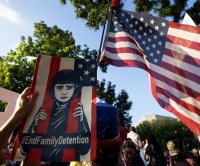