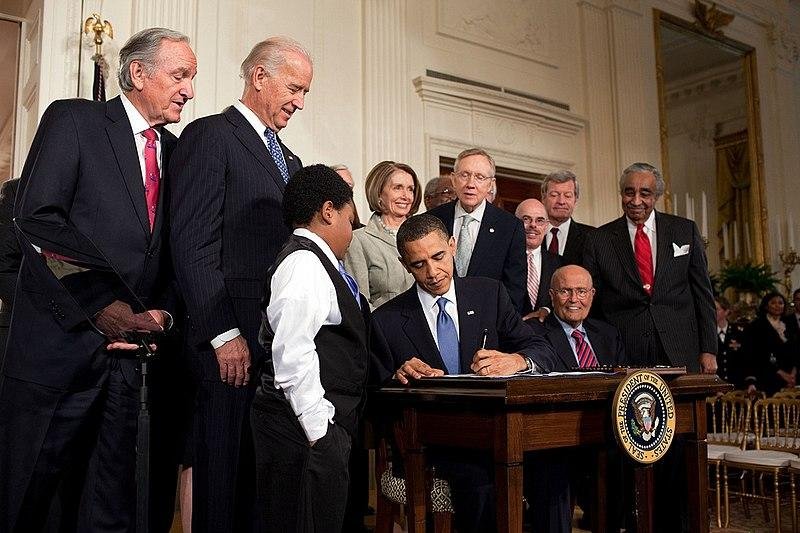 On the eve of the 10-year anniversary of President Barack Obama signing the Patient Protection and Affordable Care Act into law, a Gallup poll said a slight majority of Americans approve of it. File Photo by Pete Souza/Wikimedia Commons

March 9 (UPI) -- Gallup said Monday that a slight majority of Americans support the Affordable Care Act as it nears its 10-year anniversary.

Since President Donald Trump has been in office, public reaction to the health care law has been favorable or closely split compared to 2012-2016, when reaction was more unfavorable.

A record-high 55 percent approval of the law was reached in 2017, according to Gallup.

Poll figures dating back to 2012 showed sharply divergent views based on political party, with the division growing even more so this year as a record-high percentage of Democrats, 94 percent, now approve of the ACA, compared to 11 percent of Republicans.

Independents views have remained in between Democrats and Republicans with 53 percent approving of the ACA this year.

Other advantages were that 20 percent said they have gotten coverage for a pre-existing medical condition that wasn't covered before the law was passed, 22 percent said they were able to keep or add an adult child on their plan and 28 percent said the ACA allowed them to obtain health insurance after not previously having it.

On the negative side, 61 percent said they do not think they have access to more services in their plan since the law was enacted and 53 percent reported their premiums have increased since the law passed.

"While a slight majority of Americans approve of the Affordable Care Act, scarcely improved over the mostly divided support seen since Trump took office, Democrats are more likely than ever to approve of the healthcare law," Gallup Editor in Chief Mohamed Younis said in a statement. "Thus, despite some Democratic presidential candidates' focus on 'Medicare for all," these results indicate Democrats are in no hurry to abandon the ACA."

RELATED Gallup: Support for congressional incumbents is at its highest since 2012

Gallup interviewed a random sample of 1,020 adults across the United States from Feb. 17-28 with a margin of error of 4 percentage points.

U.S. News // 19 hours ago
Minneapolis leaders vote in favor of police reforms; ban choke holds
June 5 (UPI) -- The Minneapolis City Council voted Friday on a measure that bans police from using choke holds and other neck restraints in response to the death of George Floyd and national civil unrest.

U.S. News // 15 hours ago
Experts: COVID-19 has increased risks, costs for November election
June 5 (UPI) -- The election in November faces an increased threat of cyberattack as a result of the coronavirus pandemic and officials need to tighten security, experts said in a report Friday.