More than 35 horses have died, mostly from gunshot wounds, near the Heber Wild Horse Territory in Arizona over the past 16 months. Photo courtesy of U.S. Department of Agriculture

DENVER, March 6 (UPI) -- Someone has been shooting wild horses in a national forest near Heber-Obergaard, Ariz., for the last 16 months, and the unsolved crimes are tearing apart the small community.

Some 35 horses have been found dead in the Apache-Sitgreaves National Forest, with most of them killed by bullets, authorities said. Local horse advocates and those who don't like the horses' presence blame each other for the deaths.

Most recently, 15 horses were found shot between Jan. 9 and 12, said Kacy Ellsworth, spokeswoman for the U.S Forest Service.

No arrests have been made, and authorities declined to say if they believe the same person or multiple shooters have been committing the crimes.

RELATED Wild horse and burro numbers must be slashed, advisory board says

"The investigation is ongoing," Ellsworth said. A $5,000 reward is offered for information leading to the arrest and conviction of the shooter or shooters.

"The series of horse deaths in the vicinity of the Heber Wild Horse Territory, about 110 miles northeast of Phoenix, is an issue we are taking seriously and diligently investigating," the Forest Service said in a statement.

The horses are wild animals, but protected by the Wild and Free-Roaming Horses and Burros Act of 1971. Killing a wild horse can lead to a fine of up to $2,000 and a maximum of one year in prison, or both.

Residents say the vacation and retirement Heber-Overgaard community, with a year-round population around 2,400, is rattled by the shootings. The most recent incidents took place behind a subdivision and off a local highway.

"These shootings are bringing out the worst in people," said Realtor Robin Crawford, who lives near the forest and spends hours every week photographing the animals.

Wild horses have been controversial in the area for decades because cattle producers consider them a threat to forest grazing lands and want them gone.

RELATED U.S. proposes rules that could cause faster destruction of national forests

Now, horse advocates and ranch-affiliated townsfolk are trading insults online like "whacktivist" for horse lovers and "welfare ranchers" for cattle ranchers who graze their cows on subsidized public rangeland.

Both sides say they've received veiled threats and taunts online, including recipes for horse meat and surveillance-style photos of their properties and livestock.

But some residents think fighting about the horses is bad for business.

"People come up here for recreation to escape from the heat. They come up to enjoy the mountains. If we put panic in the forest, that stops people from coming into the community," Navajo County Supervisor Daryl Seymore said.

"We have to be inviting. When we're fighting among ourselves, who wants to go into that hostile environment?"

But the most upsetting part of the battle is the dead horses, local residents said.

"It's been heartbreaking when I have come across the carcasses of the dead horses, a couple of which I had just videotaped the day before," said Betty Nixon, a retired U.S. Army intelligence officer and fraud analyst who said she spends about 30 hours a week in the Apache-Sitgreaves forest.

Nixon said many of the animals had been shot in the abdomen or neck.

"The cruelty of shooting them in the gut, that is just cruel. The shooter was not interested in killing them humanely," Nixon said.

The shootings began in October 2018, according to the Forest Service. Twelve horses were killed that fall, and four more were found dead in February 2019. Most had gunshot wounds, and some were too decomposed to determine the cause of death, the Forest Service said.

In this January's incidents, two family bands of horses were shot in groups of eight and seven. The dead horses included foals and adults.

Some residents say they are frustrated by what they perceive is a lack of commitment by investigating agencies.

Bullets whizzed past the head of wild horse photographer Kathie Reidhead, of Payson, Ariz., last May as she was photographing horses near a watering hole. She said she saw a man with ear protection standing in front of a parked silver pickup truck with Kentucky license plates shooting a rifle toward the horses.

"I hid behind a big log, and then I jumped up with my hands in the air," she said, adding that the man stopped shooting and hurriedly put his rifle back in the truck.

Reidhead said she captured several videos and photos of the man, his truck and fleeing horses. But she said the Navajo County Sheriff's Office and Forest Service investigators were not interested in her eyewitness account.

The Forest Service is following through on tips that are received, spokeswoman Ellsworth said.

A spokeswoman at the Navajo County Sheriff's Office declined to discuss the horse deaths, saying the investigation was being led by the U.S. Forest Service.

Meanwhile, local ranchers who want the horses gone say they have been frustrated by the federal agencies and federal judges who have prevented removal of horses, which were formerly sold or slaughtered.

The number of horses has increased significantly over the past decades, county supervisor Seymore said.

"Some of those horses could have been turned loose by irresponsible animal owners who couldn't afford to keep them," he said. "We need to control that horse population for safety. Hitting a horse on the highway is more dangerous than a deer or elk."

After federal lawsuits from several animal rights and conservation groups, the District Court for the District of Arizona ruled in 2005 to grant an injunction that stops the Forest Service from selling or removing horses without first developing a wild horse management plan.

"I'm not advocating for killing of horses, but the land management agency's hands are tied and they are not allowed to manage them," said Kathy Gibson Boatman, granddaughter of a local rancher.

In February, the agency proposed its first wild-horse plan for the 19,700-acre Heber Wild Horse Territory. The public can comment through March 15 whether the Forest Service should reduce the herd to between 50 and 104 animals through a combination of bait-and-trap capture, birth control and sterilization.

The forest holds between 270 and 420 animals, according to the agency's counts, which are several years old.

The Forest Service has ruled all of the horses qualify for protection as wild. But the agency acknowledges that many of the animals are descended from escaped domestic horses that moved onto forest land from the Fort Apache Indian reservation nearby after a 2002 forest fire.

Resident Boatman bristled when she hears rumors that someone affiliated with ranchers might be shooting the horses. She called horse advocates the "bullies of the forest."

"Multiple local people here, whose families have been here since the 1800s, feel that it's a whacktivist killing the horses," Boatman said.

"The ranchers want the horses gone, but I don't think any of them would shoot them. They have too much to lose," Realtor Crawford said. "The locals are just trying to keep their way of life, and I get that, but why not just leave the horses alone? What is the big deal?"

The investigation is frustrating, she said, because so little information has been released. 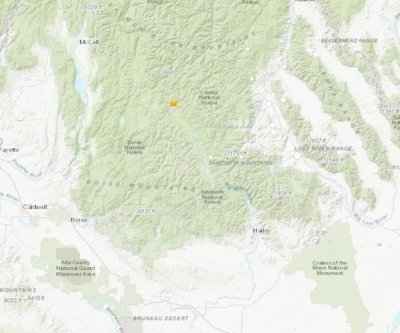 U.S. News // 13 hours ago
U.S.: Bi-state sage grouse not eligible for 'threatened' status
March 31 (UPI) -- A genetically distinct type of greater sage grouse found on the border between Nevada and California is not eligible for protection under the Endangered Species Act, the U.S. Fish and Wildlife Service said Tuesday.

U.S. News // 19 hours ago
Amazon, Whole Foods workers walk out over coronavirus disputes
March 31 (UPI) -- Workers at Amazon and Whole Foods Market have turned to walkouts to draw attention to complaints over how their companies' are handling the coronavirus outbreak.

U.S. News // 20 hours ago
Dow slides 410 points on final day of quarter
March 31 (UPI) -- U.S. stocks dropped at the end of trading Tuesday on the final day of the worst first quarter in American history.