Seven judges ruled in favor of upholding the 2019 rule with four dissenting on the 11-judge panel of the 9th U.S. Circuit Court of Appeals. Plaintiffs in the case against Secretary Alex Azar of the U.S. Department of Health and Human Services included several states, Planned Parenthood and Essential Access Health.

HHS issued the revised rule last year banning family planning providers that receive Title X funding from abortion referrals. In response, Planned Parenthood, which says it serves 40 percent of the 4 million Title X patients in the United States, called it a "gag rule" and said in August of last year it has been in the Title X program for decades, but would have to leave the program because of the rule.

Planned Parenthood joined the American Medical Association in March in suing the Trump administration to block the rule, arguing that several aspects of the rule were "arbitrary and capricious," including its "requiring clear financial and physical separation between Title X funded projects and programs or facilities where abortion is a method of family planning."

Circuit Judge Sandra Ikuta wrote in the court opinion that the 2019 rule allows family clinics to mention abortion, but not to refer or encourage it, and that it was a "reasonable interpretation" of federal law and was not "arbitrary and capricious," as plaintiffs had argued.

The opinion also vacated injunctions against the rule imposed by the district courts.

Planned Parenthood responded in a statement that the rule imposes cost prohibitive and unnecessary "physical separation" restrictions on health centers that provide abortion.

"In vacating the preliminary injunctions, the majority blesses an executive agency's disregard of the clear limits placed on it by Congress," Paez wrote. "The consequences will be borne by the millions of women who turn to Title X-funded clinics for lifesaving care and the very contraceptive services that have caused rates of unintended pregnancy -- and abortion -- to plummet."

Alexis McGill Johnson, acting president and CEO of Planned Parenthood Federation of America, called for Congress to get involved.

"Congress must take action to reverse this dangerous rule and restore access to care for millions through Title X," Johnson said in a statement. "Planned Parenthood will never give up on our patients and we will continue to do everything we can to fight this rule."

"This is a devastating decision for the millions of low-income patients who rely on the Title X program for comprehensive, quality sexual and reproductive health care nationwide," Essential Access President and CEO Julie Rabinovitz said in the statement. "We are reviewing the decision and discussing next steps with our legal team and litigation partners."

U.S. News // 52 minutes ago
Eric Adams, Curtis Sliwa clash over vaccine mandate in 1st NYC mayoral debate
Oct. 21 (UPI) -- The two men who are running to replace Bill de Blasio as mayor of New York City squared off in their first debate on Wednesday night, and clashed over the city's COVID-19 vaccine mandate.

U.S. News // 2 hours ago
Southwest says it lost $75 million over flight cancellations this month
Oct. 21 (UPI) -- Several days of delays and cancellations earlier this month ended up costing Southwest Airlines $75 million, the carrier showed in its earnings report on Thursday.

U.S. News // 3 hours ago
AG Merrick Garland expected to be asked about Texas abortion fight in House hearing
Oct. 21 (UPI) -- Attorney General Merrick Garland appeared in Congress Thursday at a hearing that was expected to include questions about the Justice Department's track on prosecuting hundreds of people for the Jan. 6 attack. 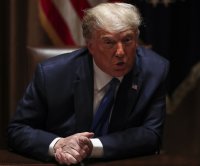 U.S. News // 9 hours ago
U.S. calls for sustained, substantive talks with North Korea
Oct. 21 (UPI) -- The U.S. ambassador to the United Nations said it was time for North Korea to halt its belligerent behavior and engage in "substantive and substantive dialogues" toward denuclearizing the Korean Peninsula.

U.S. News // 11 hours ago
NTSB recovers fire-damaged flight recorders from Texas plane crash
Oct. 20 (UPI) -- Officials with the National Transportation Safety Board investigating the crash of a Boston-bound plane said that they have retrieved the flight recorders and have begun to interview passengers, crew and witnesses.