"The truth is we need a president who can do it -- who can build a populist movement, who can create structural change and who can speak to the intersection of every American issue," Tarr said. "Bernie has created a movement that I not only believe in, but I fight for. I am so excited to join in creating a campaign to be proud of -- and an America to be proud of."

March For Our Lives was founded in the wake of the mass shooting at Marjorie Stoneman Douglas High School in Parkland, Fla., on Feb. 14, 2018, and has hundreds of chapters throughout the country headed by student leaders.

It organizes events related to preventing gun violence, and lobbies for school safety measures as well as state and national legislation.

Maxwell said that he is "beyond excited" to endorse Sanders for president.

"He gets that all of the issues we fight for are connected and gun violence isn't the cause, but a symptom of systemic injustice," he said. "He's inspired an intersectional movement of working class people, which is built upon a love for humanity and justice for all people."

U.S. News // 2 hours ago
Heavy winds in California spark fires, force power outages
Jan. 19 (UPI) -- Thousands of people in California were without power as strong gusts of wind prompted shutoffs and sparked wildfires throughout the state.

U.S. News // 7 hours ago
Federal agents arrest 'Oath Keepers' leader for U.S. Capitol attack
Jan. 19 (UPI) -- Federal prosecutors on Tuesday charged the leader of an anti-government militia group with conspiracy and obstruction of official proceedings stemming from the violent assault on the U.S. Capitol this month.

U.S. News // 12 hours ago
Senate returns; McConnell says Trump 'provoked' mob that attacked Capitol
Jan. 19 (UPI) -- In his first remarks on the Senate floor since the Capitol attack, Republican leader Mitch McConnell gave his most vocal condemnation yet of the violence that broke out two weeks ago and led to five deaths. 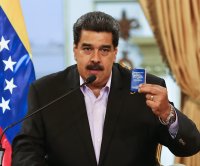