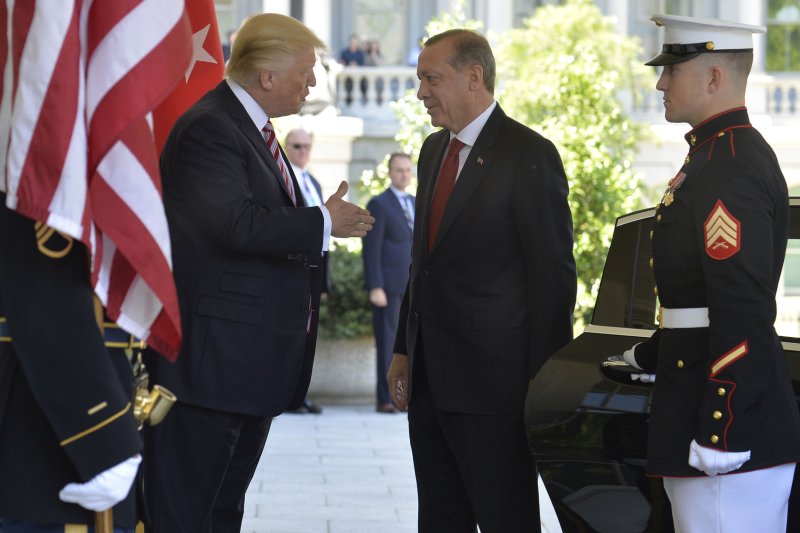 President Donald Trump welcomes Turkish President Recep Tayyip Erdogan to the White House on May 16, 2017, During the trip, Erdogan's security forces were involved in a skirmish with protesters. File Photo by Mike Theiler/UPI | License Photo

Feb. 7 (UPI) -- A federal court declined to throw out a civil lawsuit Friday by Kurdish demonstrators who were involved in a skirmish three years ago during a visit to Washington, D.C., by Turkish President Recep Tayyip Erdogan.

The U.S. District Court in Washington struck down arguments that Turkey is protected by the Foreign Sovereign Immunities Act, a 1977 law which establishes the limitations to the extent a foreign government can be sued in a U.S. court.

The case involves the 2017 incident during which activists at the Turkish ambassador's residence in Sheridan Square were violently attacked by Turkish security forces. Ankara argued the demonstration posed a threat to Erdogan, who was at the residence at the time of the scuffle. Video footage later showed Erdogan supporters joined security forces in assaulting the demonstrators. Women and elderly men were among the activists.

Federal criminal charges against several security officers were dropped in 2018 and coincided with the release of an American prisoner in Turkey.

In another suit, the court rejected Turkey's argument that its security officers were working in the country's interests and immune from prosecution. The ruling makes Turkey subject to the U. S. court system and allows the activists' suit to go forward.

"The protesters were merely standing on the Sheridan Circle sidewalk," Judge Colleen Kollar-Kotelly wrote. "Turkey points to no indication that an attack by the protesters was imminent. Instead, the Turkish security forces chased and violently physically attacked the protesters, many of whom had fallen to the ground and no longer posed a threat."