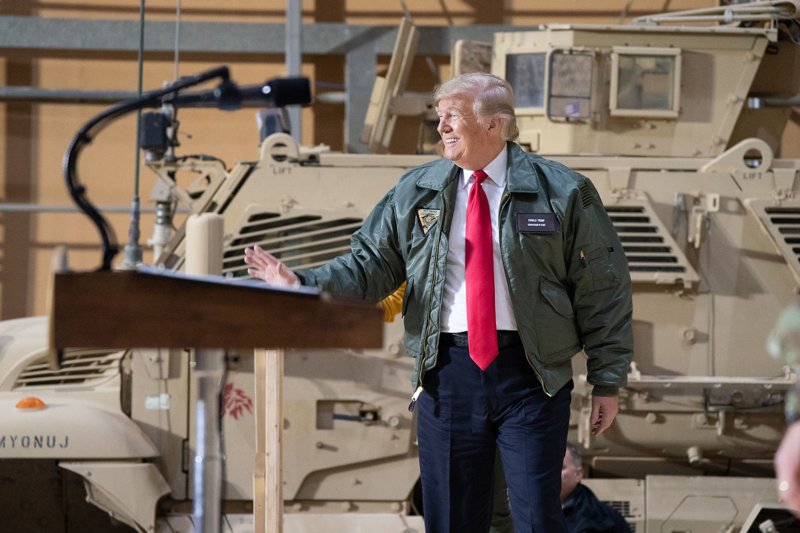 President Donald Trump arrives on stage at the U.S.-controlled al-Asad airbase in Iraq on December 26, 2018. The base was one of two attacked by Iran earlier this month. File Photo by Shealah Craighead/White House/UPI | License Photo

One would repeal war powers granted in 2002 for military action in Iraq at the start of the U.S. War on Terror. The other would bar President Donald Trump from using federal funds for "unauthorized military force against Iran."

The bills are aimed at restricting the Trump administration after the president ordered a drone strike earlier this month that killed Iranian commander and accused terrorist Qassem Soleimani and drew retaliatory missile strikes from Tehran that injured dozens of U.S. military personnel in Iraq. Trump was able to order the strike under powers granted by the 2002 law, House Democrats say.

The repeal, which was taken out of the final version of the National Defense Authorization Act, faces an uncertain outcome in the Senate. Trump has also promised a veto.

"Democrats want to make it harder for presidents to defend America, and stand up to, as an example, Iran," Trump tweeted Wednesday.

The majority of Republicans, who praised Trump for killing Soleimani, are expected to vote against the measures when they arrive in the Senate, making it nearly impossible for the Democrats to overcome a presidential veto.

"We have to make sure that we're not providing funds for an offensive war," said Rep. Ro Khanna, D-Calif., who introduced the bill prohibiting the funds in the House. "I also think that's the central power that Congress has, which is the power of the purse."

RELATED Rocket attack on U.S. embassy in Iraq injures at least one person

Palestinian leader Mahmoud Abbas to Trump peace plan: 'No, no and no'

U.S. News // 2 hours ago
East Coast on alert for Tropical Storm Ian's impacts
AccuWeather meteorologists warn that the tropical system they have been tracking for nearly a week will not only threaten to cause damage in Florida, but it could also bring widespread impacts to the East Coast.

U.S. News // 7 hours ago
Latest hurricane danger could plot an 'unusual track' toward Florida
AccuWeather meteorologists are warning Tropical Storm Ian in the Caribbean could potentially strike the west coast of Florida -- an often missed target.