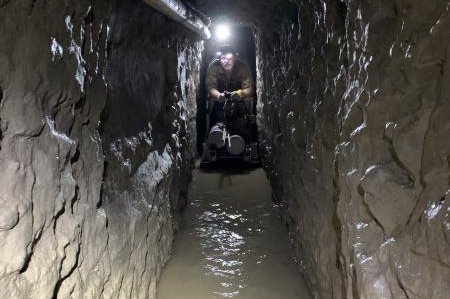 The tunnel is the longest authorities have ever found in the San Diego area, measuring about 4,300 feet. Photo courtesy U.S. Customs and Border Protection/UPI

The tunnel is the longest authorities have ever found in the San Diego area, measuring about 4,300 feet. Photo courtesy U.S. Customs and Border Protection/UPI

Jan. 30 (UPI) -- U.S. authorities have uncovered the longest underground smuggling tunnel they have ever found in the Southwest that runs between the United States and Mexico.

U.S. Customs and Border Protection said the tunnel stretched for nearly a mile from the Tijuana airport to Greater San Diego. It was found this week by Border Patrol agents and other authorities and spans 4,309 feet in length.

"I am thrilled that this high level narco-tunnel has been discovered and will be rendered unusable for cross-border smuggling," Deputy Chief Patrol Agent Aaron Heitke said in a statement Wednesday. "I am proud of the tremendous efforts of the Tunnel Task Force and our agents."

The tunnel measures 5 and a half feet tall by 2 feet wide with an average depth of 70 feet from the surface, officials said. Agents said the tunnel is so sophisticated it includes an elevator at the entrance, an extensive rail system, air ventilation, high voltage electrical cables and a complex drainage system.

"[It] demonstrates the determination and monetary resources of the cartels," Drug Enforcement Administration Special Agent in Charge John Callery said. "The DEA and our partners on the Tunnel Task Force will continue to use our resources to ensure they fail."

No arrests or seizures were made, but officials said the tunnel had been operational.

"The tunnel did not reach the surface into the United States, but evidence strongly suggests that tunnel was previously operational," Heitke said.

The tunnel is the 72nd found in the San Diego area since 1993 and the largest in the U.S. Southwest since a 2,900-foot cavern was found in 2014. Agents said the area's clay soil is conducive for digging tunnels because it contains less rock.