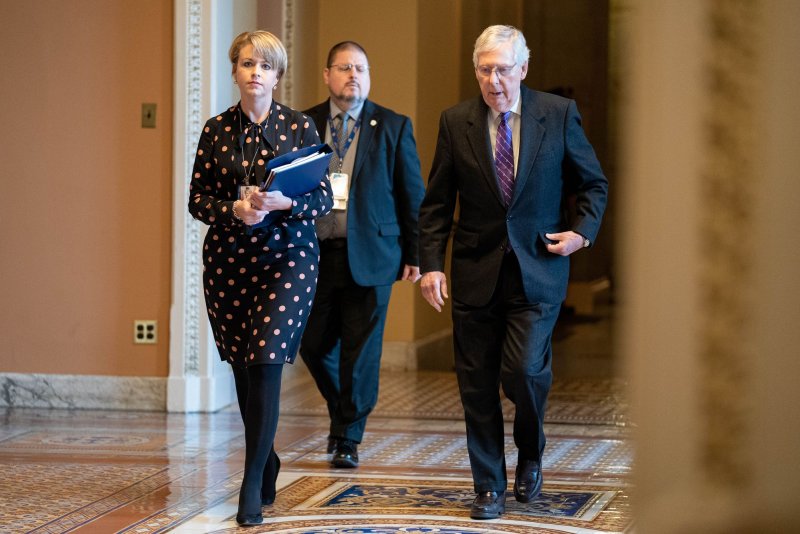 Senate Republican leader Mitch McConnell walks into the Senate chamber for the continuation of the Senate impeachment trial of President Donald Trump on Wednesday. Photo by Ken Cedeno/UPI | License Photo

Jan. 29 (UPI) -- With opening arguments completed, the Senate received an opportunity Wednesday to ask questions on both sides of the impeachment trial of President Donald Trump.

Trump's legal team on Tuesday finished defending the president against charges that he abused his power -- when he asked Ukraine last year to investigate Democratic presidential candidate Joe Biden -- and obstructed the congressional investigation that followed.

"If President Trump had more than one motive for his alleged conduct, such as the pursuit of personal political advantage, rooting out corruption and the promotion of national interests, how should the Senate consider more than one motive in its assessment of article one?"

Deputy White House counsel Patrick Philbin answered by saying the possibility of there being a public interest in the request for Ukraine to investigate Biden "destroys [Democrats'] case" that Trump did so only for personal political gain.

Under the rules for the questioning stage, the Senate will spend a total of 16 hours -- 8 hours for each side -- making inquiries of both sides. Both sides have about 5 minutes to answer each question.

The phase should offer at least some insight as to the mindset of potential Republican "swing" voters. Democrats need at least four Republican senators to side with them in their plan to file a motion to include witnesses and new evidence in the case. That, and other motions, will receive a vote following the questioning phase.

Sen. Ted Cruz, R-Tex., asked whether it mattered if there was a quid pro quo between Trump and the Ukrainian government, to which Trump attorney Alan Dershowitz replied that it did not if the president believed that he was acting in the nation's interest in making an effort to secure re-election.

"If a president does something which he believes will help him get elected in the public interest, that cannot be the kind of quid pro quo that results in impeachment," Dershowitz said.

Senators were not allowed to speak during the weeklong opening arguments, and that was also the case Wednesday. Senators' queries were instead submitted in writing and read aloud by Supreme Court Chief Justice John Roberts, who is presiding over the trial.

The process gives senators a chance to bring attention to aspects of the case they hope to highlight, but McConnell on Tuesday advised them to get right to the point with their queries.

"During the question period of the [1999 Bill] Clinton trial, senators were thoughtful and brief with their questions, and the managers and counsel were succinct in their answers," he said. "I hope we can follow both of these examples during this time."

More than 150 questions were asked during Clinton's trial more than 20 years ago.

Senate Republicans have largely opposed Democrats' calls for witnesses and evidence, but some have indicated that position may soften after a New York Times report this week that detailed firsthand knowledge from former national security adviser John Bolton about how Trump handled the aid to Ukraine and calls for Kiev to investigate Biden and his son. The information, the report said, is contained in Bolton's forthcoming book. Trump denied the details of the Times report.

Senate Democratic Leader Chuck Schumer, D-N.Y., asked house managers if there is "any way to render a verdict in this case without hearing from Bolton" and lead House manager Rep. Adam Schiff, D-Calf., said there was not.

"There's no way to have a fair trial without witnesses and when you have a witness who is as plainly relevant as John Bolton, who goes to the heart of the most serious and egregious of the president's misconduct, who has volunteered to come and testify -- to turn him away, to look the other way, I think is deeply at odds with being an impartial juror," Schiff said.

Philbin responded by saying the question at hand was not whether they would "just hear one witness."

"For this institution, the question is: What is the precedent that is going to be set for what is the acceptable way for the House of Representatives to bring an impeachment of the president of the United States to this chamber and can it be done in a hurried, half-baked partisan fashion?" Philbin said.

Lev Parnas, attended the impeachment trial Wednesday after a federal judge gave him permission to leave New York City. The judge, though, declined to remove Parnas' ankle GPS monitoring device, meaning it's unlikely he'll be allowed inside the Senate gallery.

Lev Parnas sits in the office of Senate Democratic leader Chuck Schumer to get tickets to attend the impeachment trial. Photo by Ken Cedeno/UPI
Advertisement

Parnas and his business partner Igor Furman -- both associates of Trump lawyer Rudy Giuliani -- were arrested Oct. 9 and charged with conspiracy to commit campaign finance fraud, making false statements to the Federal Election Commission and falsifying records as part of a supposed scheme to "funnel foreign money to U.S. candidates." He's accused of helping to pressure Ukraine to obtain negative information about former Vice President Biden and his son, Hunter Biden, who was on the board of Ukrainian energy company Burisma.

Trump and Giuliani have both said they have encouraged Ukraine to carry out the investigation into the Bidens. They accused Joe Biden of pressuring Ukraine to fire Shokin, who was investigating Burisma.

Shokin's successor, Prosecutor General Yuriy Lutsenko told Bloomberg in May that the investigation into the company began before Hunter Biden joined the board, and he wasn't specifically a target of the probe.

U.S. News // 9 hours ago
Google will delete data of those who visit abortion clinics
July 2 (UPI) -- Google announced Friday it will delete information including whether a person visited an abortion clinic as bans on terminating pregnancies grow in the wake of the Supreme Court's decision to overturn Roe v. Wade.

U.S. News // 11 hours ago
Man sought in shooting death of mom pushing baby stroller arrested in NYC
July 2 (UPI) -- The father of an infant whose mother was shot dead while pushing the baby's stroller on the Upper East Side of New York City earlier this week has been arrested.

U.S. News // 14 hours ago
Popular Minecraft gamer Technoblade dies of cancer at 23
July 2 (UPI) -- Technoblade, a massively popular gamer known for his Minecraft videos on YouTube, has died from cancer at the age of 23, his family announced Thursday.

U.S. News // 15 hours ago
Bodies of mother, 3 children recovered from Minnesota lake
July 2 (UPI) -- Minnesota police are investigating a possible triple-homicide after the bodies of a woman and her three children were recovered from a lake in Ramsay County.