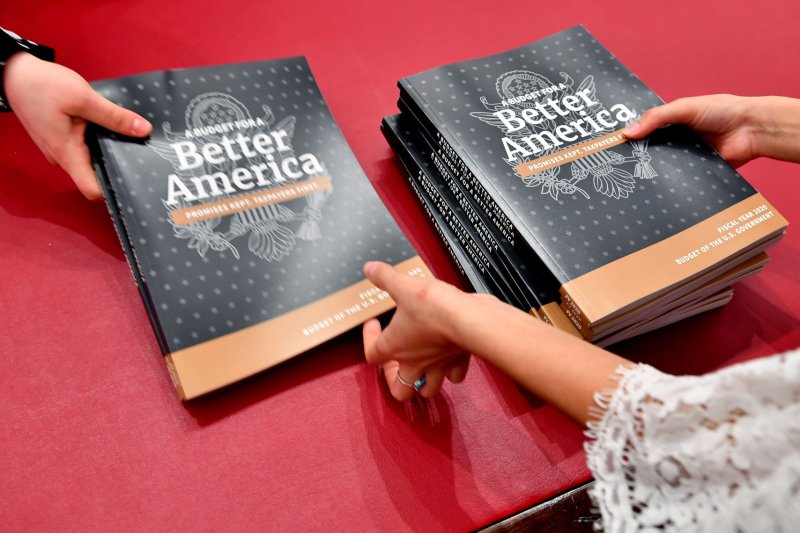 Senate staff members move copies of President Trump's fiscal year 2020 budget on Capitol Hill in Washington, D.C., on March 11. On Tuesday, the Congressional Budget Office indicated there will be a $1.02 trillion deficit in this year's budget. File Photo by Kevin Dietsch/UPI | License Photo

Jan. 28 (UPI) -- The U.S. budget deficit is projected to surpass $1 trillion this year, the first time it's hit that milestone since 2012, the Congressional Budget Office said Tuesday.

In terms of the national debt, the new report indicates it will reach $31.4 trillion by 2030, up from previous estimates.

The CBO blames the rising deficit and debt on the 2017 tax cuts and an increase in new federal spending. The estimates are based on the assumption that Congress will allow tax cuts passed in 2017 to expire in 2025. The Washington Post reported that Republicans plan to try to extend those cuts.

U.S. News // 12 hours ago
U.S.: Bi-state sage grouse not eligible for 'threatened' status
March 31 (UPI) -- A genetically distinct type of greater sage grouse found on the border between Nevada and California is not eligible for protection under the Endangered Species Act, the U.S. Fish and Wildlife Service said Tuesday.

U.S. News // 18 hours ago
Amazon, Whole Foods workers walk out over coronavirus disputes
March 31 (UPI) -- Workers at Amazon and Whole Foods Market have turned to walkouts to draw attention to complaints over how their companies' are handling the coronavirus outbreak.

U.S. News // 20 hours ago
Dow slides 410 points on final day of quarter
March 31 (UPI) -- U.S. stocks dropped at the end of trading Tuesday on the final day of the worst first quarter in American history.