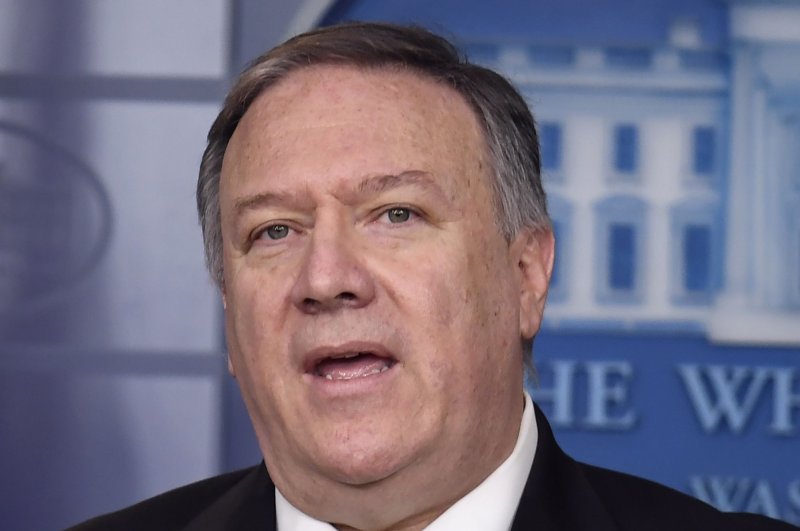 U.S. Secretary of State Mike Pompeo told the Organization of American States that the Venezuelan people "are so downtrodden and starving because of [Nicolas] Maduro's cruelty."  Photo by Mike Theiler/UPI | License Photo

"More actions are coming. Maduro certainly knows that we mean business," Pompeo told the permanent council of the Organization of American States in Washington. "It's why he sought to withdraw Venezuela from this institution."

The political crisis in Venezuela began in January 2019 when the country's opposition leader, Juan Guaidó, proclaimed himself interim president following socialist Maduro's contested swearing-in to a second term. By the end of the month, the United States -- followed by several other countries, including Canada, Brazil and Argentina -- recognized Guaidó as the rightful head of state.

The Venezuelan people "are so downtrodden and starving because of Maduro's cruelty," Pompeo said.

He praised the OAS for leading efforts to help the Venezuelan people over the past year. He cited the activation of the Inter-American Treaty of Reciprocal Assistance -- a regional defense treaty known by its Spanish acronym TIAR -- and how quickly the organization received Guastavo Tarre as the new Venezuelan ambassador, appointed by Guaidó.

"This is multilateralism; nations coming together in a way that truly does work," Pompeo said. "These have been landmark actions."

Pompeo attributed this to the leadership of OAS Secretary-General Luis Almagro, and he strongly endorsed Almagro's re-election in March. Almagro, a former chancellor of Uruguay, tackled crises in Venezuela and Nicaragua, among other issues, during his five-year term.

"Secretary Almagro is fearless and guarding against our authoritarian regimes," Pompeo said. "He believes in multilateralism that holds people accountable, that puts new ideas on the table and forces countries to take a position. He is the leader we need for the organization to continue to proactively address the central challenges in the region."

Pompeo also urged other international organizations around the world to "wake up" because "wishful thinking won't restrain authoritarian regimes" like those in Caracas.

"The people of the Americas have brought a new wave of freedom, freedom-minded governments," Pompeo said. Only Cuba, Nicaragua and Venezuela still face "stains of tyranny" in the hemisphere.

On Monday, the secretary of state will depart for his seventh trip to Latin America and the Caribbean, visiting Colombia, Costa Rica and Jamaica. The fight against terrorism and the crisis in Venezuela will dominate his agenda.

U.S. News // 1 hour ago
Federal agents investigating major California highway crash that killed 13
March 3 (UPI) -- California authorities say 13 people were killed in a major wreck near San Diego on Tuesday and more than a dozen are in the hospital with serious injuries.

U.S. News // 3 hours ago
ADP-Moody's: U.S. added 117,000 private-sector jobs in February
March 3 (UPI) -- Businesses in the United States added almost 120,000 jobs during the month of February, well short of what many economists were expecting, according to a private-sector assessment Wednesday.

U.S. News // 4 hours ago
Texas small business owners worry about lifting COVID-19 restrictions
March 3 (UPI) -- Texas Gov. Greg Abbott's order will leave it to business owners to decide whether to require customers to wear masks inside their establishments. "It's putting us in the firing line," one owner said.

U.S. News // 13 hours ago
Democrats propose creation of monument for Ruth Bader Ginsburg on Capitol Hill
March 2 (UPI) -- Democrats in the House and Senate on Tuesday introduced a bill proposing the construction of a monument honoring the late Supreme Court Justice Ruth Bader Ginsburg at the Capitol.

U.S. News // 15 hours ago
Pentagon report warns extremists use military to boost legitimacy, combat skill
March 2 (UPI) -- A Department of Defense report released on Tuesday warned that members of White supremacist and other extremist groups covet military members to increase the legitimacy of their cause and ability to carry out attacks.

U.S. News // 16 hours ago
Neera Tanden withdraws nomination as budget director
March 2 (UPI) -- Neera Tanden withdrew her name from consideration to be director of the Office of Management and Budget after facing scrutiny over her past tweets critical of lawmakers, President Joe Biden announced Tuesday.

Reese's to roll out peanut butter cups without chocolate in April