Jan. 7 (UPI) -- Speaker of the House Nancy Pelosi dug her heels into the sand late Tuesday saying she won't send articles of impeachment against President Donald Trump to the Senate until Democrats know what a trial in the upper chamber will look like.

Pelosi, D-Calif., reiterated her stance to Democratic colleagues in a letter insisting that Senate Republican leader Mitch McConnell unveil the resolution detailing the guidelines for the trial.

"It is important that he immediately publish this resolution, so that, as I have said before, we can see the arena in which we will be participating, appoint managers and transmit articles to the Senate," she wrote.

The letter came as an argument against McConnell, R-Ky., who earlier Tuesday said he has the votes to proceed with President Donald Trump's impeachment trial without first making a decision on whether to call witnesses sought by Democrats.

He said the question of witnesses will be decided after opening arguments in the case.

"We have the votes," McConnell told reporters, to proceed with the trial in a similar fashion to former President Bill Clinton's impeachment trial.

In her letter, Pelosi said calling this process similar to that of Clinton's trial is "simply not true," accusing the Republicans of designing a process that is "not only unfair but designed to deprive Senators and the American people of crucial documents and testimony."

"Under the Clinton trial, witnesses were deposed," she wrote.

"There will be votes on the four witnesses we have asked for," he said. 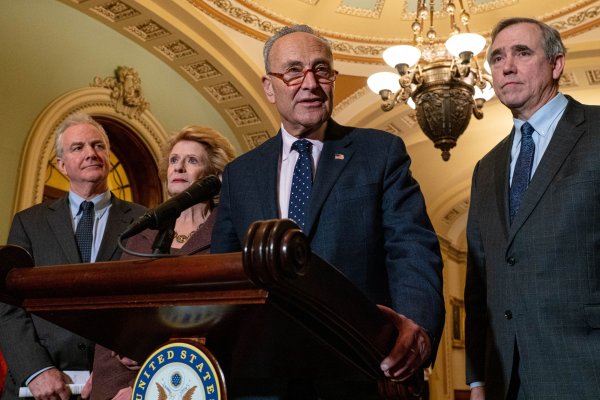 Earlier Tuesday, McConnell criticized Pelosi for continuing to hold onto both articles of impeachment that were passed by the lower chamber almost three weeks ago. House Democrats are withholding the articles from the Senate -- and, thus, delaying the start of the trial -- in a bid to negotiate with upper chamber Republicans on certain "fair" provisions of the proceeding.

McConnell has said repeatedly he'd like a speedy trial and is working with Trump's attorneys on the matter -- a move that's drawn heavy criticism from Democrats due to the impartiality oath all senators must take before participating in the trial.

"How inappropriate and how embarrassing to rush forward on a partisan basis and then treat ... what you've done like a political toy," he said. "How contemptuous of the American people."

Politico reported Tuesday McConnell had secured the 51 votes to move ahead with planning the trial without help from Democrats. Key Republican Sens. Susan Collins of Maine and Lisa Murkowski of Alaska, however, have both indicated they favor delaying a decision on witnesses, which would be a victory for Democrats. Both senators are considered "swing" voters.

Democrats have demanded the inclusion of multiple key administration witnesses and certain documents that weren't presented at the House impeachment inquiry. Schumer said he plans to force votes concerning potential witnesses at the start of the trial.

"Make no mistake, on the question of witnesses and documents, Republicans may run but they can't hide," he said. "There will be votes at the beginning on whether to call the four witnesses we've proposed and subpoena the documents we've identified.

"If every Republican senator votes for a rigged trial that hides the truth, the American people will see that the Republican Senate is part of a large and awful cover-up."

McConnell and Schumer have been at an impasse for weeks over Democrats' demands for the new evidence and four witnesses -- including former national security adviser John Bolton, who said Monday he's willing to testify if subpoenaed.

When asked on Tuesday if he would be OK with Bolton testifying, Trump said that decision will be "up to the lawyers" and the Senate, while also noting comments by Ukrainian President Volodymyr Zelensky that he felt no pressure from Trump to carry out investigations into former Vice President Joe Biden and his son, Hunter Biden.

"He would know nothing about what we're talking about," Trump said of Bolton. "Because as you know the Ukranian government came out with a very strong statement -- 'no pressure, no anything' -- and this is from the boss. That's from the president of Ukraine. The foreign minister came out with a statement that was equally as strong."

In his remarks Tuesday, McConnell denounced the House impeachment process as "most rushed, least thorough and most unfair" in the nation's history.

The House approved the articles Dec. 18, formally making Trump the third U.S. president to be impeached by the lower chamber. The articles accuse him of abusing his power and obstruction of Congress for resisting efforts to aid in the House inquiry.

McConnell is seeking two resolutions on the matter -- one defining the trial procedures and one to determine whether any witnesses should be called.

If any Senate Republican votes to prevent witnesses and documents from coming before the Senate:

The American people will see that they are part of a cover-up. pic.twitter.com/Q6UQI3Dkcz— Chuck Schumer (@SenSchumer) January 7, 2020