Jan. 7 (UPI) -- A Mississippi prosecutor who has tried a man six times for the murders of four people nearly a quarter-century ago has recused himself from further involvement.

Evans has tried Flowers six times in connection to the 1996 deaths of four people. Flowers was found guilty in four of those trials, but the first three were overturned due to prosecutorial misconduct. The last conviction and death sentence from his sixth trial in 2010 was overturned by the Supreme Court in June, which said Evans violated the law by excluding black jurors. The other two trials ended in a hung jury.

In each of Flower's six trials, he faced an all-white jury.

"I have personally prosecuted the defendant in all six of his prior trials. While I remain confident in both the investigation and jury verdicts in this matter, I have come to the conclusion that my continued involvement will prevent the families from obtaining justice and from the defendant being held responsible for his actions," Evans said.

Flowers' attorney Rob McDuff said in a statement his team is "pleased" with Evans' recusal and hopes it will lead to an eventual dismissal.

"We look forward to what we hope will be an impartial review of this case by the new attorney general of Mississippi," he said.

Evans' recusal follows Judge Joseph Loper granting Curtis bail in December on a $25,000 bond. In his decision, Loper said prosecutors face presenting a "far weaker case to the jury" if it reaches trial.

"Curtis Flowers is innocent," he said. "This misguided prosecution has been plagued from the beginning by misconduct and racial discrimination, and it is time to bring it to an end."

U.S. News // 1 hour ago
3 dead, 2 missing after tubers go over N.C. dam
June 18 (UPI) -- Authorities in North Carolina said search and rescue crews scouring the Dan River for a group of tubers who went over a dam retrieved three bodies while two other people were still missing.

U.S. News // 3 hours ago
1 dead, 12 injured in Arizona drive-by shooting spree
June 17 (UPI) -- Police in Arizona said officers have taken a man into custody following a series of drive-by shootings through three West Valley cities that left one person dead and at least 12 others injured. 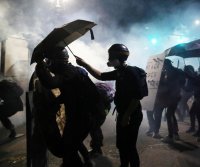