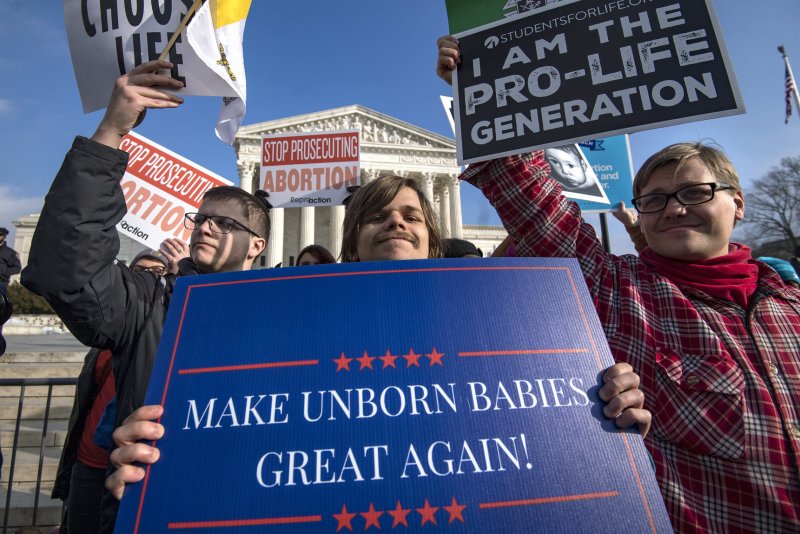 Jan. 3 (UPI) -- More than 200 lawmakers have asked the U.S. Supreme Court to consider overturning Roe vs. Wade, a 1974 landmark decision to legalize abortion, in a brief supporting a Louisiana law that would severely limit access to the procedure.

The 207 members of Congress -- 39 senators and 168 House members from 38 states -- filed the brief urging the Supreme Court to uphold the Louisiana law when it hears the case in March, stating they "have a special interest in the correct interpretation, application and enforcement of health and safety standards for elective abortion by the people of the states they represent."

Reps. Dan Lipinski of Illinois and Collin Peterson of Minnesota were the only Democrats to sign their names to the legal filing.

In the brief, the lawmakers urge the Supreme Court to uphold a lower court's decision to let stand a Louisiana law that requires physicians who perform abortions to have admitting privileges to a hospital within 30 miles of where the procedure is being performed.

The Supreme Court struck down a similar law in Texas in the case of Whole Woman's Health vs. Hellerstedt but concerning the Louisiana law, the U.S. 5th Circuit Court of Appeals ruled in 2018 that since the state wasn't as large as Texas, there was less "undue burden" placed on women and let the law stand.

June Medical Services challenged that decision, and the Supreme Court agreed in October to hear arguments this spring.

The Center for Reproductive Rights argues that the law is part of an ongoing effort to "regulate abortion out of existence" and that only one physician in the state would be able to continue to provide abortions if the law goes into effect.

"Louisiana is openly defying the Supreme Court's decision from just three years ago, in which they found an identical Texas law unconstitutional," Center for Reproductive Rights President and CEO Nancy Northup in a statement. "We are counting on the court to follow its precedent."

The lawmakers argue that the ruling in Whole Woman's Health vs. Hellerstedt created "confusion among Congress and state legislatures alike as to which laws might withstand constitutional scrutiny."

They also said the U.S. 5th Circuit Court of Appeals' difficulty in defining what burden on abortion access is undue "illustrates the unworkability of the 'right to abortion' found in Roe vs. Wade," stating it shows the need for the Supreme Court to consider overruling the landmark case.

"Amici urge the court to uphold the decision below and to provide clarity regarding the bounds of the government's ability to safeguard the lives and health of their citizens," the lawmakers said in the brief.

Ilyse Hogue, president of NARAL Pro-Choice America, rebuked the lawmakers' brief, saying the anti-choice movement is no longer trying to hide their agenda of repealing Roe vs. Wade.

"They are gunning to end Roe, criminalize abortion and punish women," Hogue said in a statement. "But we will not back down. We will hold these anti-choice politicians accountable for working to rip away our reproductive freedom."