Jan. 2 (UPI) -- A Canadian teenage mountain climber who survived after falling 500 feet on Oregon's Mount Hood gave thanks to his rescuers and said it won't stop him from continuing in the sport.

Gurbaz Singh, 16, of Surrey, British Columbia, said he was nearing the final push of a Dec. 30 ascent of Mount Hood, in an area of the peak known as the Pearly Gates, when he lost his footing and took a fall that would have killed many other climbers.

Instead, he escaped with a broken leg and on Wednesday said from his hospital bed at Legacy Emanuel Medical Center in Portland, Ore., he was grateful for the help he received.

After falling into a part of the mountain known as the Devil's Kitchen, he had to wait hours before rescuers reached the spot an evacuated him on a stretcher.

"I'm so thankful for everyone who helped me," he told the Canadian Broadcasting Corp. "They kept me awake and they helped my mood because it hurt a lot."

An experienced climber, Singh's attempt to scale the 10,500-foot Mount Hood would have been his 98th summit climb. He documents his adventures on social media as "Kidmountaineer." He credited his training and sheer luck for his survival.

After his leg heals, Singh said he intends to ease back into mountain climbing in stages.

"It makes me feel happy, like I've accomplished something bigger than myself," he said.

U.S. News // 5 hours ago
Lucid Motors announces NYC offices, arrival of new vehicle
June 22 (UPI) -- Lucid Motors, the Silicon Valley electric vehicle startup that holds the distinction of having the longest range of any other EV, announced the opening of a new flagship office in New York City Monday. 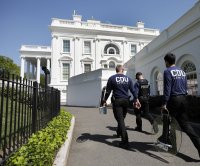 U.S. News // 7 hours ago
McDonald's to launch first U.S. rewards program this summer
June 22 (UPI) -- McDonald's announced Tuesday that it will unveil the first U.S. loyalty program in its history this summer.

U.S. News // 7 hours ago
Deaths at U.S. nursing homes surged by 170,000 in 2020, watchdog report says
June 22 (UPI) -- Deaths among Medicare patients in nursing homes last year surged by more than 30%, with two pronounced spikes at different times of the year, according to a report by the federal health department's inspector general.