Dec. 17 (UPI) -- The United States executed 22 people in 2019, making this the fifth consecutive year in which there were fewer than 30 convicts put to death, according to a year-end report released Tuesday.

The number of executions declined by three compared to 2018 (25) and the number of new death sentences -- 33 as of Tuesday -- dropped by nine. The figures represent an overall decline in the use of the death penalty over the past two decades.

In its annual report, the Death Penalty Information Center described the death penalty in the United States as being "near historic lows," with its use "significantly eroding" in some regions on the country.

Meanwhile, U.S. Attorney General William Barr has been working to resume federal executions after a 16-year hiatus. In July, he asked the Bureau of Prisons to schedule executions for five death row inmates starting in December.

A federal judge in Washington, D.C., ruled that the executions should be put on hold due to the introduction of a new, single-drug lethal injection protocol. The process replaced the existing three-drug cocktail commonly used it many state-level executions.

The Supreme Court refused to overrule the lower court's decision.

In the same time frame, states have been gradually decreasing their use of the death penalty, some even abolishing its entirely. In 2019, New Hampshire became the 21st state to get rid of capital punishment, and California issued a moratorium on it. Indiana hasn't carried out a death sentence in a decade, joining 10 other states that have gone at least that long without an execution.

DPIC Executive Director Robert Dunham, lead author of the report, said "2019 came close to being the year of executing the innocent."

"Two prisoners were executed this year despite substantial doubts as to their guilt, and James Dailey in Florida and Rodney Reed in Texas came close to execution despite compelling evidence of innocence. Our courts and public officials too frequently flat out ignore potentially deadly mistake, and often take steps to obstruct the truth," he added.

"That is one of the reasons why public support for the death penalty continues to fall."

A Gallup poll released in November indicated that for the first time in more than three decades of polling, a majority of U.S. respondents believe life imprisonment is a better punishment for convicted murderers than the death penalty. Sixty percent of respondents favored imprisonment, while 36 percent chose capital punishment.

The results mark a distinct shift from the past decades. During the 1980s and 1990s, Gallup recorded consistent majorities favoring the death penalty as the better option for convicted killers.

In October, Gallup found a majority of respondents still supported the death penalty when asked if they approve its use for convicted murderers. In that survey, 56 percent answered "yes." That level has remained steady for three years, but is down from a high of 80 percent in 1994.

U.S. News // 53 minutes ago
Fiery Tesla crash in Texas kills 2 men, no one in driver's seat, authorities say
April 19 (UPI) -- Two people died when a Tesla going at a high speed with no one in the driver's collided into a tree and caught fire in an area near Houston, Texas, authorities said Monday. 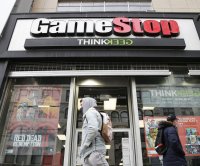