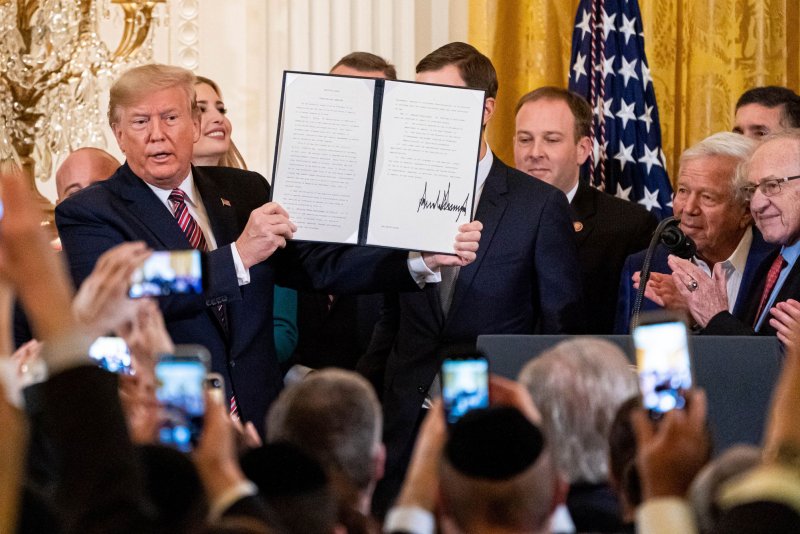 Dec. 11 (UPI) -- President Donald Trump signed an executive order seeking to extend protections under the Civil Rights Act to prevent anti-Semitic discrimination during a Hanukkah event at the White House on Wednesday.

Under the executive order, discrimination against Jewish people may constitute a violation of Title VI of the Civil Rights Act of 1964, which prohibits discrimination on the basis of race, color and national origin in programs and activities funded through federal assistance but does not include a provision for discrimination based on religion.

Appearing in the East Room of the White House before about 300 assembled guests for the Hanukkah event, Trump said the order would target "institutions that traffic in anti-Semitic hate."

RELATED Thousands rally for Donald Trump in Pa. amid impeachment

"If you want to accept the tremendous amount of federal dollars you get every year you must reject anti-Semitism," Trump said.

Harvard law professor Alan Dershowitz also spoke at the event on Wednesday night, hailing the order as "one of the most important events" in the battle against anti-Semitism.

Trump's adviser and son-in-law, Jared Kushner, published an op-ed in The New York Times stating that the order would adopt the definition of anti-Semitism put forth by the International Holocaust Remembrance Alliance in 2016. Thet definition includes "the targeting of the state of Israel, conceived as a Jewish collectivity," denying "the Jewish people their right to self-determination, e.g., by claiming that the existence of a state of Israel is a racist endeavor" or comparing "contemporary Israeli policy to that of Nazis" as examples of anti-Semitism.

Kushner also responded to criticism that followed news of the proposed order on Tuesday night that suggested it would classify Judaism as a nationality.

"The executive order does not define Jews as a nationality," he wrote. "It merely says that to the extent that Jews are discriminated against for ethnic, racial or national characteristics, they are entitled to protection by the anti-discrimination law."

The Palestinian Campaign for the Academic and Cultural Boycott of Israel said the order would suppress support for Palestinians.

U.S. News // 7 hours ago
Six dead, including unborn child, in Indianapolis 'mass murder'
Jan. 24 (UPI) -- At least six people were killed and one person was in critical condition after what police believe was a targeted mass murder in Indianapolis on Sunday morning.

U.S. News // 15 hours ago
Weekend snow and ice target the Midwest
Jan. 24 (UPI) -- A one-two punch of storm systems are in store for the Midwest through early week, which will undoubtedly produce travel headaches for those in its path. While the latter of the two storm systems will likely yield higher snow and ice accumulations, the first round of wintry weather has required travelers to remain on alert as well.