For the second time in two days, a federal judge has ruled against the Trump administration's attempts to divert funds from the military to build physical barriers along the U.S.-Mexico border. Photo by Justin Hamel/UPI | License Photo

Dec. 11 (UPI) -- A federal judge in California has ruled against the Trump administration's efforts to divert some $3.6 billion in funding for military construction projects to build permanent barriers along the U.S.-Mexico border.

Judge Haywood Gilliam Jr. of the Northern District of California ruled that Trump's allocation of the money intended for military construction projects to fund 11 border barrier projects was unlawful.

In his decision, Gilliam said the Trump administration had attempted to circumvent Congress, which had refused to fund the border barrier projects, by using military funds under the declaration of a national emergency to build the wall along the U.S.-Mexico border.

Gilliam said "the court cannot blind itself to the plain reality" that the border barrier projects the Trump administration claims are necessary to support the use of the armed forces "are the very same projects the Defendants sought -- and failed -- to build under the [Department of Homeland Security's] civilian authority because Congress would not appropriate the requested funds."

In February, immediately after signing a spending bill to avert a government shutdown that did not include all the money he was seeking to fund his border wall, President Donald Trump declared a national emergency at the U.S.-Mexico border that requires the use of the armed forces, making available its construction authority.

Gilliam also said in his decision that the Trump administration failed to prove the border barrier projects are necessary to support the armed forces.

"Promoting efficiency and efficacy is not tantamount to necessity, given the nature of the construction at issue. And the court declines Defendants' invitation to blur this distinction," Gilliam said. "There is simply nothing in the record before the court indicating that the 11 border barrier projects -- however helpful -- are necessary to support the use of the armed forces."

The decision was handed down on two cases against Trump: one filed by a nine-state coalition led by California and the other by the American Civil Liberties Union on behalf of the Sierra Club.

"This is a critical victory that sends a strong message to the White House: You are not above the law," he said in a statement.

On Tuesday, a federal judge in Texas issued a permanent injunction to block the administration from diverting the $3.6 billion that would establish 175 miles of new or reconstructed wall along the southern border.

U.S. News // 3 hours ago
Kentucky State Police capture inmate one week after escape
Jan. 18 (UPI) -- Authorities arrested a prison inmate in Kentucky one week after he escaped custody during a work release, the state police said.

U.S. News // 6 hours ago
Holiday weekend storm generating dangerous travel across Northeast
Jan. 18 (UPI) -- Snow and ice sweeping through the Northeast will likely bring travel difficulties for travelers during the long holiday weekend, even in cities like Philadelphia, New York City and Boston. 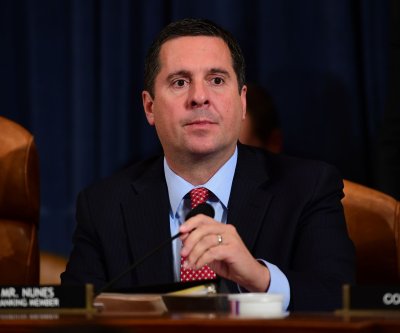 U.S. News // 21 hours ago
Northeast next stop for juggernaut storm racing across U.S.
A weekend storm that originated as a bomb cyclone in the West earlier this week is destined to bring the most substantial snowfall of the season so far to parts of the mid-Atlantic and central Appalachians.