"Nothing in this opinion is intended to absolve Exxon Mobil from responsibility for contributing to climate change through the emission of greenhouse gases in the production of its fossil fuel products," Ostrager wrote, but "this is a securities fraud case, not a climate change case."

The case was filed last year after a lengthy investigation. The attorney general's office had alleged in the trial, which began in October, that the oil giant intentionally misled investors by downplaying the financial risks of climate change regulations, and that then-Exxon CEO Rex Tillerson enabled the deceptive information.

"As a result of Exxon's fraud, the company was exposed to far greater risk from climate change regulations than investors were led to believe," then-New York Attorney General Barbara Underwood said in the 97-page lawsuit.

James' office "failed to prove by a preponderance of the evidence that Exxon Mobil made any material misrepresentations that would have been viewed by a reasonable investor as having significantly altered the 'total mix' of information made available," Ostrager ruled Tuesday.

On the last day of trial, the attorney general's office withdrew two counts of fraud from its lawsuit, and went forward with two counts based on the Martin Act, a New York statute against shareholder fraud that has a lower burden of proof.

Exxon Mobil had asked the judge to rule on all four counts anyway, saying the state had tarnished its reputation.

Ostrager said that Exxon Mobil was not liable for any counts.

"Today's ruling affirms the position Exxon Mobil has held throughout the New York Attorney General's baseless investigation," an Exxon Mobil statement read. "We provided our investors with accurate information on the risks of climate change. The court agreed that the Attorney General failed to make a case, even with the extremely low threshold of the Martin Act in its favor."

Despite the ruling, James vowed in her own statement to "continue to fight to ensure companies are held responsible" and "fight to end climate change." 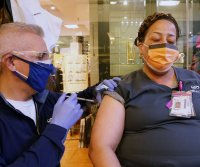 U.S. News // 3 minutes ago
COVID-19 vaccine mandate kicks in for healthcare workers in 25 states, D.C.
Jan. 27 (UPI) -- Healthcare staff at all facilities and providers certified under Medicare and Medicaid must have received at least one dose of a COVID-19 vaccine starting Thursday. 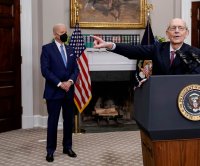 U.S. News // 1 hour ago
Education secretary calls for schools to address inequities, engage parents in 2022
Jan. 27 (UPI) -- Education Secretary Miguel Cardona said in a speech Thursday that the department aims to concentrate on helping students who fell behind during distance learning last year and make sure teachers are paid enough.