Dec. 5 (UPI) -- Tennessee Gov. Bill Lee said Wednesday he will not intervene in the case of blind death row inmate Lee Hall who is scheduled to be executed Thursday.

"The justice system has extensively reviewed Lee Hall's case over the course of almost 30 years, including additional review and rulings by the Tennessee Supreme Court yesterday and today," Lee said in a statement. "The judgment and sentence stand based on these rulings and I will not intervene in this case."

Hall, 53, was sentenced to death in 1992 for killing his ex-girlfriend Traci Crozier the year before by setting her on fire while she was lying in the front seat of her car, according to court documents. She sustained third-degree burns to over 90 percent of her body and died hours later at the hospital.

On Wednesday, Hall selected a Philly cheesesteak, two orders of onion rings, a slice of cheesecake and a Pepsi cola for his last meal. He was moved to death watch Tuesday shortly after midnight for the three-day period before his execution.

Last month, Hall told prison officials that he chooses to die by the electric chair, but his legal team has been attempting to delay his execution, arguing his case should be retried as one of the jurors during his 1992 trial was biased against him -- a request that was rejected by the Tennessee Supreme Court on Tuesday.

"It is a sad day for justice in the State of Tennessee," Hall's legal team said in a statement to The Tennessean. "Unless the federal courts intervene, Tennessee will become the first state in modern United States history to execute a blind man."

His lawyers also say that their client went blind while on death row due to poor government care.

If his execution is not stopped, Hall will become the second blind man to be put to death since the death penalty was reinstated in 1976. 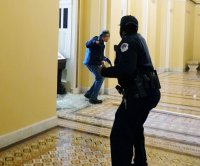 U.S. News // 12 hours ago
Union: 'Unconscionable' that Capitol Police failed to disclose Jan. 6 threat
Jan. 27 (UPI) -- Capitol Police Labor Committee Chair Gus Papathanasiou said Wednesday it was "unconscionable" that leadership was aware of the threat of the Jan. 6 riot at the Capitol and failed to properly inform officers.