Dec. 4 (UPI) -- The Trump administration on Wednesday introduced a new work requirement rule that will cause hundreds of thousands of Americans to lose access to food stamps.

The U.S. Department of Agriculture said the final rule affects childless, non-disabled adults between the ages of 18 and 49.

"We need to encourage people by giving them a helping hand but not allowing it to become an indefinitely giving hand," Agriculture Secretary Sonny Perdue said. "Now, in the midst of the strongest economy in a generation, we need everyone who can work, to work. This rule lays the groundwork for the expectation that able-bodied Americans re-enter the workforce where there are currently more job openings than people to fill them."

Under the current rule, single, able-bodied adults can only receive benefits from the Supplemental Nutrition Assistance Program for three months out of every 36-month period unless they work or receive training at least 20 hours a week. Areas with higher unemployment rates or insufficient jobs were eligible to receive a waiver to that rule.

About 2.9 million single adults received food stamps in 2018, about 74 percent of whom weren't employed, the USDA said.

Under the new requirements, the waivers will be tougher to get, tightening the definition of insufficient jobs and limiting the timeframe the areas can receive a waiver.

The USDA told reporters the new requirements are expected to cause about 688,000 people to lose SNAP benefits. The department said it will save the government about $5.5 billion over five years.

Rep. Marcia Fudge, chairwoman of the House Agriculture Subcommittee on Nutrition, Oversight and Department Operations, criticized the rule, which she described as "callous and cruel."

"This is an unacceptable escalation of the administration's war on people in need, and it comes during a time when too many are forced to stretch already-thin budgets to make ends meet," she said. "The USDA is the Grinch that stole Christmas. Shame on them."

U.S. News // 31 minutes ago
Coronavirus forcing a change in outreach strategy for 2020 Census
WASHINGTON, April 2 (UPI) -- Community organizers, civic engagement organizations and grass-roots groups who are pushing for greater participation in the 2020 Census have been forced to change their strategies as coronavirus paralyzes the U.S. 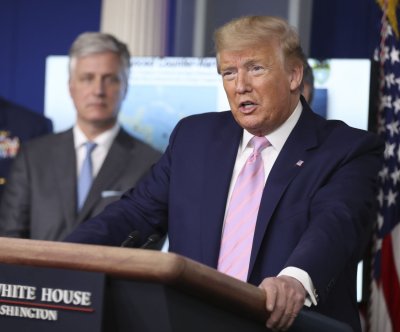 U.S. News // 13 hours ago
Gov. DeSantis says state will accept Floridians from coronavirus-infected cruise ship
April 1 (UPI) -- Florida Gov. Ron DeSantis said Wednesday that he will allow a cruise ship -- on which nine people have tested positive for COVID-19 -- to dock in the state.

U.S. News // 15 hours ago
Storms poised to pummel Lone Star State prior to week's end
Thunderstorms will threaten to bring severe weather as well as needed rainfall to portions of central and southern Texas before the end of the week.

U.S. News // 17 hours ago
Texas stays third execution amid COVID-19 pandemic
April 1 (UPI) -- A Texas appeals court on Wednesday issued its third stay of execution amid a disruption to the judicial system brought on by the coronavirus pandemic.