George Zimmerman, the man acquitted in the shooting death of Trayvon Martin, sued the teen's family, accusing them of crafting a false testimony in the trial. File Pool Photo by Joe Burbank/UPI  | License Photo

Dec. 4 (UPI) -- George Zimmerman, the Florida man acquitted of homicide charges in the death of 17-year-old Trayvon Martin, is suing the slain teen's family and others involved in the case.

The suit filed Wednesday in Polk County Circuit Court cites a documentary about the case titled The Trayvon Hoax: Unmasking the Witness Fraud that Divided America that accuses Martin's family of crafting a false testimony.

Zimmerman's suit names Martin's mother, Sybrina Fulton, as the lead defendant along with attorney Ben Crump, who represented the Martin family in the case, as well as other prosecutors and publisher Harper Collins which released Crump's book Open Season: Legalized Genocide of Colored People.

Crump responded to the lawsuit on Wednesday saying the allegations defy logic and that it is "time to close the door on these baseless imaginings."

"This plaintiff continues to display a callous disregard for everyone but himself, revictimizing individuals whose lives were shattered by his own misguided actions," Crump said. "He would have us believe that he is the innocent victim of a deep conspiracy, despite the complete lack of any credible evidence to support his outlandish claims."

Joe Gilbert, the film's director, distributed a copy of the suit to media and scheduled a press conference ahead of a screening of the film. Coral Gables Art Cinema, which was set to host the screening, tweeted it was "not aware of all the details surrounding this private rental" and canceled Gilbert's reservation at the venue.

The suit alleges Martin's family made efforts to produce a false narrative about the case through dishonest accounts from witnesses including another defendant, Rachel Jeantel, who it alleges lied about her identity claiming her nickname was "Diamond Eugene."

"Defendant Jeantel lied repeatedly about having a relationship with Trayvon, about being on the phone with Trayvon in the days and minutes up to his death and lied about everything she claimed to have heard over the phone in the hours and minutes prior to Trayvon's death," the lawsuit states.

The suit seeks $100 million in civil damages as Zimmerman's attorney Larry Klayman said the trial in which his client was accused of shooting and killing Martin in 2012 while volunteering for the neighborhood watch, "was a complete travesty of justice which destroyed my client's life."

Zimmerman maintained he shot Martin, who was unarmed, in self-defense and was acquitted of murder charges in 2013 prompting a national conversation about so-called "stand your ground" laws. 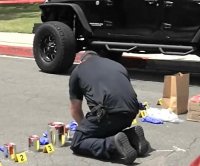