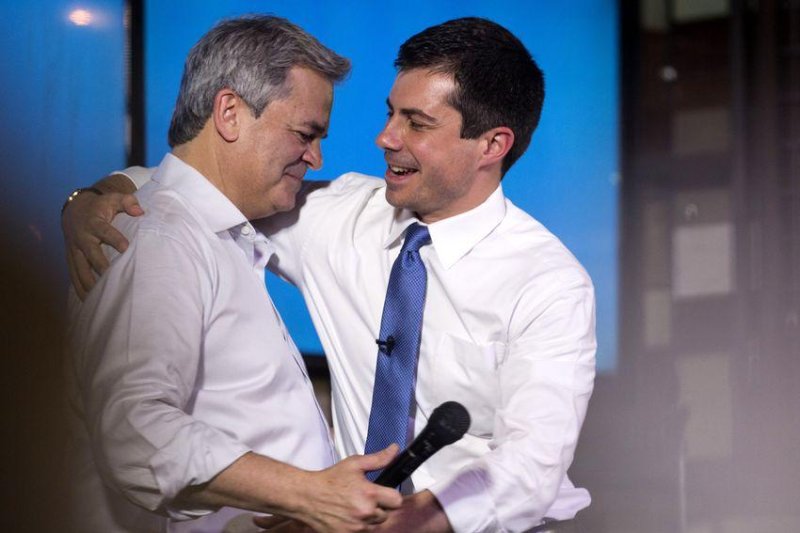 Austin, Texas Mayor Steve Adler welcomes presidential candidate Pete Buttigieg to the stage during a campaign stop at Buford's Beer Garden in Austin on August 10. Photo by  Mikala Compton for The Texas Tribune

Dec. 2 (UPI) -- At South by Southwest, before the Austin City Council approved an ordinance easing rules for camping and panhandling in public, Mayor Steve Adler wanted guidance on what would prove to be a controversial proposal for addressing homelessness.

So he turned to a mentor and friend: Pete Buttigieg.

Buttigieg, the mayor of South Bend, Ind., was sleeping over at Adler's house during his trip to Austin, Texas. He didn't offer a plan for addressing homelessness in the sprawling capital city, but he did act as a sounding board for Adler, a protégé 26 years his senior. The conversations about homelessness in Austin, Adler said, continued throughout the year.

Over the past five years, what began as a collegial, professional relationship has blossomed into a genuine friendship, according to interviews with Adler, several donors who have met Buttigieg through the Austin mayor and Buttigieg's campaign.

"The irony was not lost on me that I was looking up to someone who was shorter than I was," Adler told a brimming crowd during Buttigieg's campaign launch.

Now Buttigieg, according to recent polls, is a front-runner for the Democratic nomination for president, and his friendship with Adler has formed the basis of his campaign's presence in Texas. On the trail, he's bragged about having the backing of nearly 60 mayors, a boon of institutional support for Buttigieg's unconventional attempt to springboard from a perch in a small local government to the White House. Buttigieg's presidential campaign has outlasted that of Texas Democrats' favorite son, Beto O'Rourke, and is polling well above the only remaining Texan in the race, former San Antonio Mayor Julián Castro.

Adler appears to be all in with "Mayor Pete," flooding the Internet with pro-Buttigieg messages, offering to speak on his friend's behalf, facilitating Austin-area fundraisers and maxing out in campaign donations. And Buttigieg, consistently polling among the top four candidates in the race, has found a Texas ally who's able to help him logistically, such as opening his home to the candidate when he visits Austin, and politically, like facilitating introductions to the who's who in the state's party.

My good friend @PeteButtigieg made the inaugural @TIME 100 Next, a list of rising stars shaping the future. I was honored to weigh in on his character, his intellect and why his mayoral experience matters. https://t.co/Mv4P8yLh3u— Mayor Adler (@MayorAdler) November 13, 2019

"I've always found him to be an inspiring guy and to have a really clear North Star on trying to improve conditions and the quality of life for everybody," Adler said in a recent interview.

Adler says he was drawn to Buttigieg's magnetism, though on the surface the two may look like a political odd couple. Here was a young, openly gay man representing a small Indiana town and a much older, less experienced mayor in charge of a city nearly eight times the size of South Bend.

Their first encounter, in 2015, was at the U.S. Conference of Mayors. Adler was in his first year as mayor and Buttigieg was a veteran of three years. Buttigieg was young -- only 34 at the time -- but stood apart from his more senior colleagues. Adler, encouraged by predecessors to find a mentor at the conference, was bowled over by the younger mayor's intellect and wit.

"He is exceptionally smart, and that stands out very quickly," Adler said. "He can explain complicated topics and issues in a way that's easy to understand."

Their bond strengthened during a 2016 trip to Europe coordinated by then-Secretary of Transportation Anthony Foxx. It was during that trip, Adler said, that he first learned that the Indiana mayor was courting his then-boyfriend, Chasten Glezman. Adler watched Buttigieg buy a small token of his affection for Chasten that started with the letter "C." Several years later, Adler and his wife, Diane, attended Buttigieg and Chasten's wedding in South Bend.

Now Adler has become one of Buttigieg's biggest cheerleaders in the state. In addition to providing feedback on Buttigieg's mental health policy and filing paperwork at the Texas Democratic Party headquarters in Austin so Buttigieg's name can appear on the Texas primary ballot, Adler has introduced the candidate to several deep-pocketed Texas donors, according to people familiar with Buttigieg's campaign.

"I was interested" in Buttigeg, said Meme Styles, who met the presidential candidate along with nearly two dozen well-connected black Austinites in early September. Styles said she left the meeting with more questions than answers, however.

"I didn't hear a clear priority of what his clear plan is for our community, but what I thought was powerful was his intent to just listen and to hear the stories of people of color in Austin," she said.

Adler's enthusiasm for Buttigieg stands out in Texas Democratic circles, while other leading figures have yet to rally around a single candidate.

On the campaign trail, Buttigieg has presented himself as a centrist technocrat, drawing explicit contrasts to his progressive rivals. He calls his current healthcare proposal "Medicare for all who want it" and has moved toward the center on issues like gun control, a strategy that could help him win both rural Democrats and Republicans looking for an alternative to President Donald Trump.

"Warren and Sanders have that progressive vote sewn up between them so [Buttigieg] is smart to take what's left," Bill Miller, a longtime Austin lobbyist, said of Massachusetts Sen. Elizabeth Warren and Vermont Sen. Bernie Sanders. "And there's a whole lot that's left."

But even with O'Rourke out of the race, Castro struggling to raise enough money to remain viable and polls showing the race tighter than ever in traditionally Republican Texas, Buttigieg has struggled to gain traction here. Most Texas Democrats have rallied behind former Vice President Joe Biden, Warren and Sanders, according to the latest University of Texas/Texas Tribune poll.

Adler said he didn't feel compelled to support either O'Rourke or Castro over Buttigieg. He introduced O'Rourke during a campaign kickoff event in Austin -- leading some to believe he would endorse the El Paso Democrat -- only to buck both Texans in the race two weeks later. Adler said he considers O'Rourke and Castro friends and gave them a heads-up before going to South Bend to introduce Buttigieg at their rival's kickoff event.

"My intent as mayor of the city was to welcome all of the candidates as they came to town," Adler said. "But when Pete was getting into the race, I began to think that the unique position I had to be a validator for him meant that [endorsing] him was something I needed to do."

He wasn't alone in his support: Austin City Council member Jimmy Flannigan also attended Buttigieg's campaign kickoff, while influential Texas donors -- including prominent married couple Noel Landuyt and Gary Schumann, one an academic and the other an attorney -- also jumped on board.

"What Pete is doing, and what he's done for my wife and I, is he has inspired us," said Texas Democratic donor and former Democratic National Committee deputy finance chairman Kirk Rudy. "He's inspiring people maybe more than some of the other people in the race -- regardless of whether they're from Texas or not. It's clear to me he's resonating with people."

What stands out in Adler and Buttigieg's friendship is that while both have positioned themselves as moderate Democrats, Adler has faced a harsh backlash from Republicans as of late over the homelessness ordinance. Much of the state's GOP has lumped him in with the city council's younger, more progressive members, and over 2,000 people signed a petition to oust him as mayor over the ordinance.

The backlash comes as Buttigieg makes strides with disillusioned conservatives and attempts to peel support away from Biden and offer himself as the viable centrist alternative to candidates like Warren and Sanders.

As a result, Adler has found himself in a delicate position: Austin's left-leaning voters have re-elected him by huge margins, yet his city's handling of the homelessness ordinance may turn off some of the people Buttigieg likely hopes to court.

Buttigieg's perceived pragmatism is one of the things that attracted Adler, the Austin mayor said. And should Buttigieg win the Democratic nomination, some experts say his moderate credentials could serve him well in the state.

"Hands down, he's going to do better than Warren or Sanders," Miller said. "Those candidates are non-starters in non-urban areas in Texas."

Adler remained coy when asked what a possible Buttigieg administration could mean for the Austin mayor down the line. And with no immediate speculation about a potential Cabinet position for Adler, most political spectators appear to be taking the friendship at face value.

"I have a job here that I like," Adler said, laughing. "My support for Pete is I'm motivated by two things: He's a good friend, and I truly believe he would be a great president."

Disclosure: South by Southwest, Bill Miller and Steve Adler, a former Tribune chairman, have been financial supporters of The Texas Tribune, a nonprofit, nonpartisan news organization that is funded in part by donations from members, foundations and corporate sponsors. Financial supporters play no role in the Tribune's journalism. Find a complete list of them here.

U.S. News // 5 hours ago
Poll: Americans' satisfaction with U.S. world standing at 17-year high
Feb. 27 (UPI) -- Americans are more satisfied today with the United States' present standing in the world than they have been in nearly 20 years, a new survey showed Thursday.