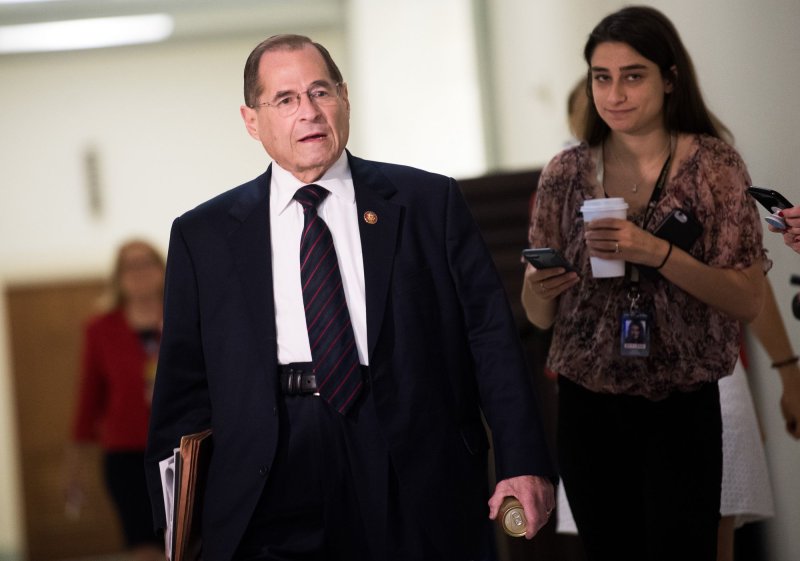 Dec. 1 (UPI) -- The White House told House Democrats Sunday that neither President Donald Trump nor his attorneys would participate in the Judiciary Committee's hearing later this week.

In a five-page response, White House counsel to the president Pat Cipollone told Nadler that the Trump administration would not be participating in a process that "violates all past historical precedent, basic due process rights and fundamental fairness."

"We cannot fairly be expected to participate in a hearing while the witnesses are yet to be named and while it remains unclear whether the Judiciary Committee will afford the president a fair process through additional hearings," Cipollone said. "More importantly, an invitation to an academic discussion with law professors does not begin to provide the president with any semblance of a fair process. Accordingly, under the current circumstances, we do not intend to participate in your Wednesday hearing."

RELATED Trump back in Palm Beach after surprise trip to Afghanistan

Nadler had given the Trump administration until Sunday to respond to its invitation to participate in Wednesday's "Constitutional Ground for Presidential Impeachment," testimony from a panel of constitutional experts on what constitutes an impeachable offense and the definition of "high crime and misdemeanor" as written in the Constitution.

Cipollone said Nadler's invitation was vague and contained "little information" about the upcoming hearing while accusing the Democrats of "no doubt purposely" scheduling it for when Trump would be in Britain for a NATO summit.

"I will be representing our County in London at NATO, while the Democrats are holding the most ridiculous Impeachment hearing in history," Trump said via Twitter. "... The Radical Left is undercutting our Country. Hearings scheduled on same dates as NATO!"

Cipollone said that they would respond by the Friday deadline concerning a separate invitation to participate in further hearings.

"Again, your letter provided no information whatsoever as to the dates these hearings will occur, what witnesses will be called, what the schedule will be, what the procedures will be or what rights, if any, the Committee intends to afford the president," he said, accusing the Democrats of creating "the false appearance of providing the president some rudimentary process."

The White House's response comes as the House intelligence committee is expected on Monday to allow members to start reviewing a report on the findings of its two-month impeachment inquiry launched following a whistle-blower complaint that said Trump pressured Ukraine to investigate his political rival former Vice President Joe Biden and his son, Hunter Biden.