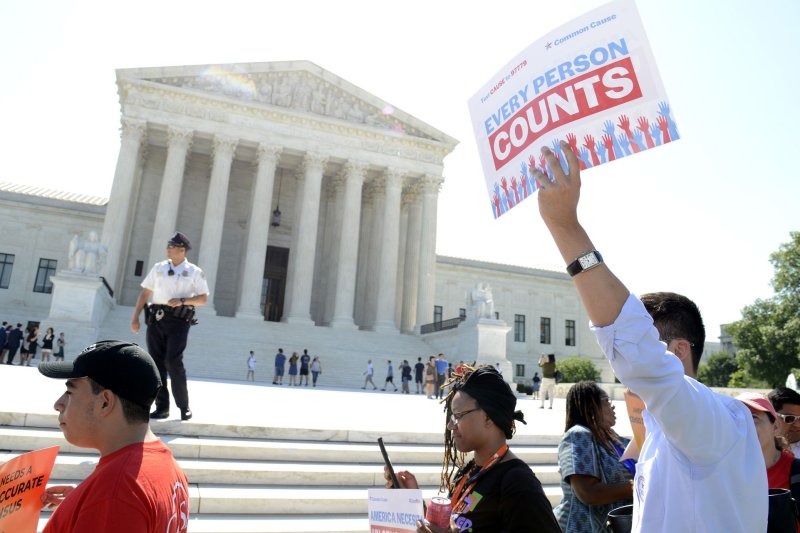 Demonstrators gather in front of the U.S. Supreme Court in Washington, D.C., on June 27 over the court's ruling to block a citizenship question on the 2020 Census. File Photo by Mike Theiler/UPI | License Photo

Nov. 26 (UPI) -- The House oversight committee said Tuesday it's filed a lawsuit to compel Trump administration officials to produce documents related to their controversial efforts to add a citizenship question to the 2020 Census.

Panel Chair Rep. Carolyn Maloney said she filed the suit to force Attorney General William Barr and Secretary of Commerce Wilbur Ross to comply with committee subpoenas for the records they received in July, when they were found in contempt of Congress for refusing to do.

"I am filing this enforcement action today because the Trump Administration's brazen obstruction of Congress must not stand," Maloney said in a statement. "President Trump and his aides are not above the law. They cannot be allowed to disregard and degrade the authority of Congress to fulfill our core Constitutional legislative and oversight responsibilities."

The 58-page suit, filed with the U.S. District Court in Washington, seeks "11 unredacted documents concerning key developments in the process of adding the citizenship question" and other purported evidence concerning Ross's March 2018 announcement that next year's survey would ask residents about their legal status.

The administration's plans to add the question was blocked by the U.S. Supreme Court in June, by a vote of 5-4. President Donald Trump slammed the ruling as "totally ridiculous" and called for a delay in the census. Proponents argued the question would help enforce voting rights, while critics assailed it as a measure to locate undocumented immigrants.

U.S. News // 15 hours ago
Judge rules Harvard owns slave images, not descendants
March 6 (UPI) -- A Massachusetts judge ruled this week that a series of slave images belong to Harvard University, but the ancestor of the subjects who were forced to strip to the waist for the photos plans to appeal.

U.S. News // 17 hours ago
Major warmup on the way for millions across the central, eastern U.S.
After multiple one-day teases of springlike warmth amidst an overall chilly end to meteorological winter, good news is in store for many fans of warm weather across the central and eastern United States.