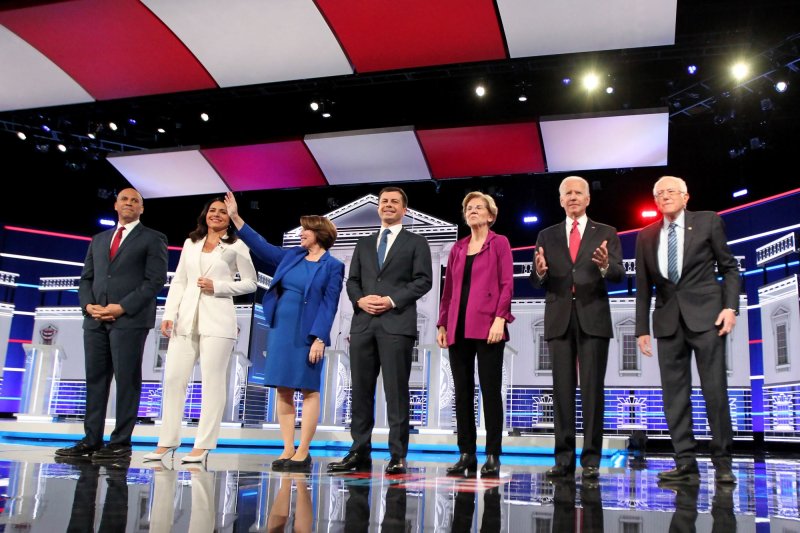 South Bend, Ind., Mayor Pete Buttigieg speaks to reporters after the debate, where he said farmers can be part of the solution to climate change. Photo by Tami Chappell/UPI | License Photo

Sen. Cory Booker of New Jersey criticized President Donald Trump for distancing the United States from allies by placing tariffs on countries such as Canada in the midst of its trade conflict with China.  Photo by Tami Chappell/UPI | License Photo

Tom Steyer, who has donated his own money to fight climate change, said that as president, he would declare a climate change emergency. Photo by Tami Chappell/UPI | License Photo

Sen. Amy Klobuchar of Minnesota  said the impeachment process is about the state of U.S. democracy and that President Donald Trump regularly places his own interests above those of the nation. Photo by Tami Chappell/UPI | License Photo

Former Vice President Joe Biden blows a kiss while being introduced prior to the debate.  Photo by Tami Chappell/UPI | License Photo

Nov. 20 (UPI) -- Democratic 2020 presidential hopefuls weighed in on testimony from the impeachment investigation of President Donald Trump during Wednesday night's debate, the fifth of the primary season.

Moderator Rachel Maddow of MSNBC opened the debate in Atlanta by asking the field of 10 candidates about the impeachment proceedings after U.S. Ambassador to the European Union Gordon Sondland testified Wednesday there was quid pro quo involving the new Ukrainian president's request for a meeting with President Donald Trump.

Former Vice President Joe Biden -- whom Trump was targeting for investigation in his request to Ukraine along with his son Hunter Biden -- said Trump and Russian President Vladimir Putin don't want him to be the Democratic candidate.

Biden added that fear of facing him head-on in the 2020 election was why Trump held up millions of dollars in military aid to Ukraine on the condition that Kiev announce it would investigate him and his son.

Massachusetts Sen. Elizabeth Warren took aim at Sondland, noting that he had contributed $1 million to Trump's inaugural fund before being named EU ambassador.

Warren said if she was elected president, she would not "give away ambassador posts to the highest bidder" and pointed to an October proposal that would prevent donors from becoming ambassadors.

"My plan will make it the law by prohibiting campaign donations and political spending from being a consideration in the selection of an ambassador," she said.

Minnesota Sen. Amy Klobuchar said Wednesday's testimony did not change her view that Congress should await a Senate trial on Trump before moving forward with impeachment.

"I have made it very clear that this [is] impeachable conduct and I've called for an impeachment proceeding," she said. "I just believe our job as jurors is to look at each count and make a decision."

She also asserted that the impeachment process is about the state of U.S. democracy, saying Trump regularly places his own interests above those of the nation.

"One of the most important responsibilities of the commander in chief is to concern herself with the security of our nation and homeland," she said.

Harris added that it's important for the United States to maintain a reputation that "we keep to our word, we are consistent, we speak truth and we are loyal," adding that she would not make concessions to North Korea to keep denuclearization negotiations going.

Vermont Sen. Bernie Sanders condemned the "forever wars" the United States is engaged in, contrasting Biden's support for the war in Iraq with his own efforts to lead the opposition against it and the first Gulf war.

He also called for a curb of military spending to better address the actual needs of U.S. defense.

"We need a foreign policy that understands who our enemies are," he said. "We don't have to spend more money on the military than the next 10 nations combined."

Businessman Andrew Yang said he would take a strong stance against Russian interference in U.S. elections, declaring any undermining of U.S. processes as an act of hostility and aggression.

"We know that they've found an underbelly, and they've been clawing at it, and they've made it so that we can't even trust our own democracy," he said.

Yang also proposed a world data organization to allow the United States to gain control of information to force Russia to the negotiating table and bring it into the international community.

New Jersey Sen. Cory Booker criticized Trump for distancing the United States from allies by placing tariffs on countries such as Canada in the midst of its ongoing trade conflict with China.

"This is a president that seems to want to go up against China in a trade war by pulling away from our allies and, in fact, attacking them as well," he said. "At the very time that China is breaking international rules, practicing unfair practices, stealing technology, forcing technology transfer and violating human rights, this nation is pulling away from critical allies we would need to show strength against China."

He also called for a less "transactional" foreign policy, including holding China accountable for human rights policies, as well as scrutinizing human rights violations committed by the United States, such as the detaining of children at the Mexico border.

When asked about ending farm subsidies provided by Trump during the trade conflict, South Bend, Ind., Mayor Pete Buttigieg said so many solutions to U.S. problems lie with farmers -- adding that they should be "one of the key pillars" of how the United States combats climate change.

"I believe that the quest for the carbon-negative farm could be as big a symbol of dealing with climate change as the electric car in this country," he said.

Buttigieg said farmers are important to spreading the message of climate change to rural communities.

Hawaii Rep. Tulsi Gabbard said her climate change plan would focus on transitioning away from fossil fuels and ending subsidies to the fossil fuel industry, as well as investing in a new "green economy" and transitioning agriculture toward a system that focuses on local and regional production of food.

Gabbard decried "hyper-partisanship" she said has led to congressional gridlock to solutions for climate change.

"This is an issue that impacts all of us as Americans and people all over the world," Gabbard said. "This is not a Democrat issue or a Republican issue. This is about the environmental threats that each and every one of us face."

Philanthropist Tom Steyer pledged to use the powers of the presidency to declare a state of emergency on climate change on his first day in office.

Steyer added that he would ensure his climate policy is led by people who are affected most by air and water pollution, namely "low-income black and brown communities."

"How are we going to pull this country together? How about this? We take on the biggest challenge in history, we save the world and we do it together," he said.

Only 10 candidates in the broad field seeking the Democratic nomination to challenge Republican Trump in next year's election qualified for Wednesday's debate. 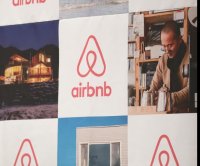 U.S. News // 12 minutes ago
Airbnb aims for $35 billion valuation in IPO this month
Dec. 1 (UPI) -- Airbnb said in a federal filing Tuesday it plans to list about 50 million shares from $44 to $50 per share during its mid-December initial public offering in a plan to raise $2.6 billion. 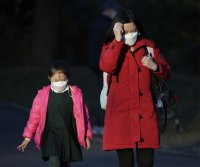 U.S. News // 22 minutes ago
Bipartisan group proposes $900B COVID-19 stimulus plan to break deadlock
Dec. 1 (UPI) -- A bipartisan group of lawmakers on Tuesday unveiled compromise legislation for a new round of coronavirus stimulus worth more than $900 billion. 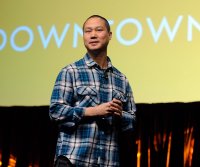 U.S. News // 5 hours ago
Watch live: Mnuchin and Powell, divided on COVID-19 funds, testify in Senate
Dec. 1 (UPI) -- Treasury Secretary Steve Mnuchin and Federal Reserve Chairman Jerome Powell will testify in the Senate Tuesday about the ongoing economic response to the COVID-19 pandemic, a subject that has divided the two recently.