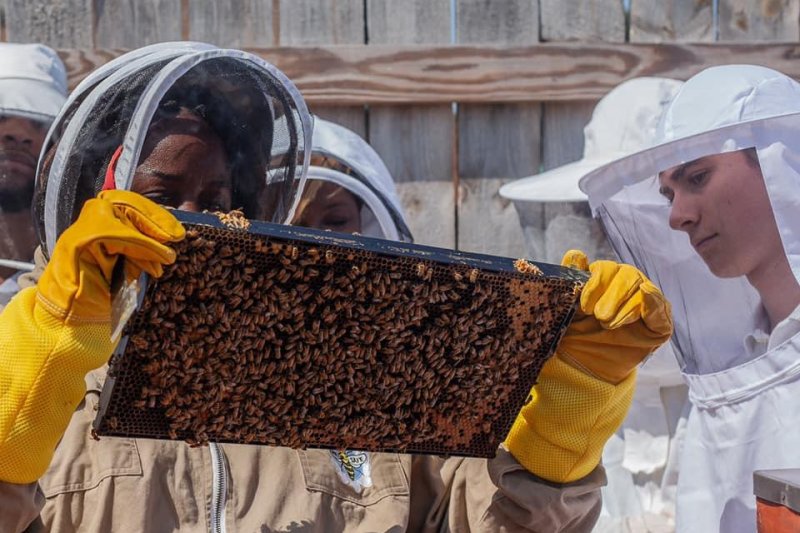 In these places, beekeeping collectives are teaching skills that generate extra cash, as well as protecting pollinators that have suffered from die-offs across the country.

In West Virginia's hilly coal country, the Appalachian Beekeeping Collective has trained about 80 residents to raise bees in southern counties devastated by downturns in the coal industry.

"I wish I started doing this 30 years ago," said former coal miner James Scyphers, 70, who works full time for the collective and raises bees with his son. "Anybody who has started fooling with bees, 99 percent love taking care of them. Bees are the most fascinating thing I've ever worked with."

The downturns affect shopkeepers, people in the railroad industry, truck drivers, teachers, "everyone in the region," Giles said.

But as coal demand dropped, "every week we'd hear about someone losing their jobs in the coal mines," Peck said.

Then the opioid epidemic hit hard in the 1990s in a region with one of the country's highest poverty rates, Peck said. "The drugs came, and it has been a nightmare," he said.

In the Hinton-based bee program, area residents are trained by master beekeepers.

"This is my third year raising bees, and I was always scared of bees after being stung by yellowjackets when I was young," said Curtis Jones, 57, a retired diesel mechanic who gave up raising chickens in favor of bees.

"The bee business has been beneficial," said beekeeper and property inspector Mark Richmond, who lives outside Hinton. "The input on the community has been gradually building up. There's cash input into the economy. It is scattered and it's steady and it's staying."

The collective holds beekeeping classes and provides hive boxes, queen bees and colonies to participants. Once a year, master beekeepers remove honey from the hives, paying participants the market rate of about $7 per pound.

Although bees in several hives died last winter, Jones said he repopulated them with wild bees he removed from his neighbor's tree.

"Bees are a relaxing kind of hobby," he said. "Even if I'm not financially making much off it, it's something I'm doing for our world, pollinating plants and keeping things alive."

The West Virginia hills are "an ideal utopia for bees," Giles said.

Ancient deciduous forests are filled with flowering trees like bask wood, tulip topper and sourwood that provide nectar. The pollen variety makes for a distinctive honey richer in flavor than typical store honey, she said.

Historically, early settlers in the area raised bees, Giles said. "This is in our muscle memory and our DNA. West Virginia has been a state that was built by extraction, and honey is another form of extraction, with the profits coming back to the beekeepers."

The decline of the U.S. coal market destroyed the good-paying union jobs of many coal workers in Appalachia, said Rob Godby, an economist and coal expert at the University of Wyoming. Nine U.S. coal mining companies have declared bankruptcy this year.

"Reclamation is seen as one way to re-employ unemployed coal workers, but the challenge is to find a way to generate wages similar to what they earned in the coal industry," Godby said. "Generating new jobs at those economic locations is difficult to deal with. Very often, in order to recover from this kind of job loss, you may have to relocate and re-skill."

Giles said local residents don't expect that raising bees will replace an income from working in the coal industry, but it helps. "This is a way to pay off debts and help my grandbabies,'" one participant told her.

"I encourage anybody from the coal mines or anyone out of work to pursue [beekeeping]," said former miner Syphers. "If you follow through with it and dedicated, it's really good extra income and one of the best things, you're outside in nature, and it's amazing what bees actually do."

"The town of Hinton is a shadow of its former self," Peck said. "It never will be economically viable like it was with the huge coal mine operations, but then again, you don't need to earn lots of money here," he said. "I just bought a really swell 100-year-old house for $21,000."

By using vacant lots in Detroit to set up beehives, beekeepers are doing their part to help urban farms by pollinating fresh vegetables, said Timothy "Paule" Jackson, who started Detroit Hives with partner Nicole Lindsey in 2017. Jackson's grandmother recommended raw honey for a prolonged illness, and Jackson said it helped.

"It's important to consume honey locally and make sure that it's raw," Jackson said. The enzymes from wildflower nectar, consumed over time are "highly medicinal and have great health benefits to your body."

The non-profit has converted nine Detroit vacant lots into apiaries and gives presentations at local schools. The outside of each hive is decorated by a local artist.

The couple hope they can grow their honeybee empire into 200 hives. The company sells 8-ounce jars of raw honey for $25 online. The team is rolling out a curriculum next year.

"You typically don't see many beekeepers of color on the national scale," Jackson said. "But I want to inspire others to know they can do the same thing."

A side project is planting vacant lots with pollinator-friendly flowering plants to encourage native bees.

"These lots are not sprayed with chemicals, so that helps the bees and pollinators," Jackson said. "Also, whenever you have a vacant lot that has constant activity and is maintained by community, you see a decrease in crime and blight."

Scientists don't know exactly why the number of bees in the United States has been dropping rapidly since 2012. Honeybee colony collapse has partly been attributed by researchers to Varroa mites that attack juvenile bees, as well as pesticides used in industrial agriculture.

University of Maryland Honey Bee Lab scientists at the Bee Informed Partnership survey beekeepers around the country with the U.S. Department of Agriculture to find out the extent of bee losses in different states. Last winter, beekeepers lost 38 percent of their colonies due to bad weather and disease.

The loss of bees around the world makes local beekeepers even more important to keep pollinator populations healthy, Jackson said.

U.S. News // 1 hour ago
Army identifies soldiers killed by falling tree in Georgia
Aug. 11 (UPI) -- U.S. Army officials have confirmed the identities of two soldiers who were killed Tuesday when they were struck by a falling tree during training in Georgia.

U.S. News // 3 hours ago
Grand jury charges man with hate crimes for Dallas Koreatown salon shooting
Aug. 11 (UPI) -- A grand jury in Texas has indicted the man accused of shooting up a Dallas hair salon in May on hate crime charges.

U.S. News // 5 hours ago
3 dead, dozens of homes damaged in Indiana house explosion
Aug. 11 (UPI) -- At least three people were killed and more than 35 homes were damaged in an explosion that rocked the small community of Evansville, Ind., authorities said.

U.S. News // 5 hours ago
Lindsey Graham seeks to dismiss 2020 Georgia election grand jury subpoena
Aug. 10 (UPI) -- Attorneys for Sen. Lindsey Graham on Wednesday argued that he is immune from a subpoena compelling him to testify before a special grand jury in Georgia about possible 2020 election interference.