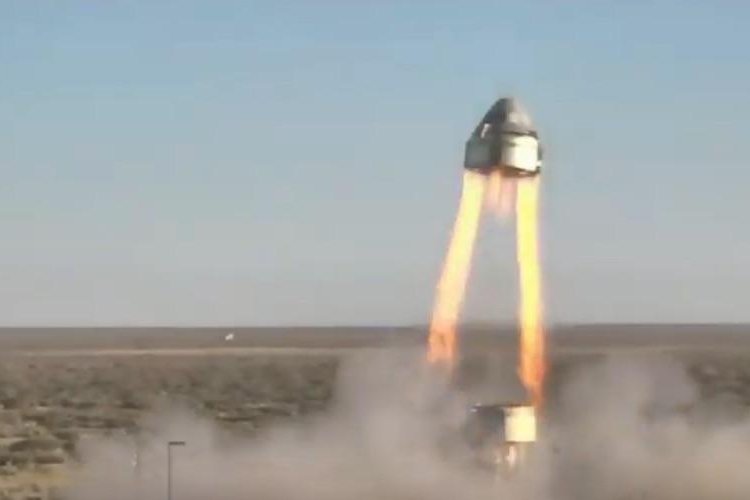 The test advances NASA's efforts to bring back human spaceflight for the first time since the space shuttle program ended in 2011. Since the, the United States has relied on purchasing seats on Russian Soyuz capsules to reach the International Space Station.

Starliner is now set for an unmanned test flight to the International Space Station on Dec. 17.

Two of three main parachutes opened and slowed the capsule, with airbags easing the landing on the desert surface.

Boeing said in a statement after the test that "It's too early to determine why all three main parachutes did not deploy. However, having two of three deploy successfully is acceptable for the test parameters and crew safety."

The company said it didn't expect any impact to its schedule because of the parachute issue.

The abort test saw the capsule accelerate to about 650 mph in five seconds, verifying that Starliner's engines and thrusters are capable of firing in the event of an emergency while astronauts are sitting on the launch pad or ascending. The test was designed to carry the capsule a mile high and a mile north of the test site.

"We have Starliner taking flight for the very first time," a commentator on NASA Live TV said.

"It's been a long time since we've launched out of the United States," NASA astronaut Mike Fincke said after the test. He's one of three astronauts designated to fly on Starliner with Nicole Mann and Chris Ferguson.

Fincke has flown twice on Russian Soyuz capsules. He said the space program appreciates Russia's help getting to space for many years, but "It's time to have more options."

The test took place at 9:15 a.m. EST after a slight delay. Boeing then worked on recovering the capsule and analyzed data from the test.

Starliner is part of NASA's Commercial Crew Program to develop flights to the space station through a public-private partnership. Boeing is basically competing with SpaceX, which has been testing its Crew Dragon capsule.

U.S. News // 13 hours ago
Four injured, one critically, after bus crashes through Calif. parking lot
Dec. 3 (UPI) -- Four people remained hospitalized Saturday, including one with critical injuries, after a transit bus crashed into more than a dozen vehicles in a California shopping center parking lot.

U.S. News // 15 hours ago
Tampa police chief placed on leave after golf cart traffic stop
Dec. 3 (UPI) -- The police chief of Tampa, Fla., has been placed on administrative leave after flashing her badge at a deputy who had stopped her while she and her husband were riding golf cart.

U.S. News // 18 hours ago
Pentagon unveils B-21 Raider, 1st new strategic bomber since Cold War
Dec. 3 (UPI) -- The U.S. Air Force has publicly unveiled the new B-21 Raider, the Pentagon's first new long-range strike bomber since the Cold War and touted as the "backbone" of a modernized bomber fleet.

U.S. News // 19 hours ago
Body of missing Texas girl found; Fedex driver charged with murder
Dec. 3 (UPI) -- The body of a missing 7-year-old North Texas girl has been found near her home and a delivery driver stands charged with kidnapping and murder in connection with her death, sheriff's officials say.