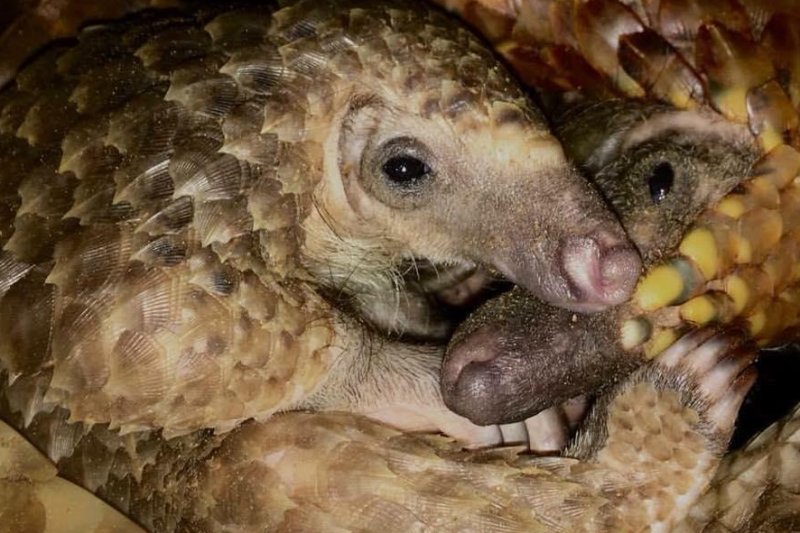 Seized bags of dried pangolin scales are displayed during a press presentation at Kwai Chung Customhouse in Hong Kong in 2018. File Photo by Jerome Favre/EPA

ORLANDO, Fla., Oct. 16 (UPI) -- Researchers from Florida and Illinois are leading a global effort to understand and protect the world's most trafficked mammal -- the little-known pangolin.

Also called a scaly anteater, the cat-size pangolin is hunted and killed for its scales and meat in Africa and Southeast Asia. New research includes the so-called "Pango-Cam" attached to their backs to provide crucial information about the pangolin diet and territory.

Without quick efforts to understand how to breed the pangolin in captivity, many researchers fear it will be wiped out before many people even knew it existed -- leaving an unknown hole in its native ecosystem that could have unknown impact.

"We still know relatively little about them. When they get sick, we struggle to help them," said Matthew Shirley, a conservation scientist at Florida International University who is directing the camera project.

"One of the things we are trying to figure out is how to replicate what they are eating and doing in the wild so they can be more successful in captivity," Shirley said.

A video clip shows the small animal climbing through trees and brush and eventually dining on weaver ants, which make hanging nests out of silk-like spiderwebs.

"Asian pangolins are on the verge of extinction," Shirley said. "We know virtually nothing about what they do, where they do it, what types of resources they need."

"We can't do that to find animals. Every individual is precious, so we are attaching a variety of devices when we find a pangolin to record and transmit data," he said.

The cameras are attached to the scales, which are made of substance similar to that of fingernails, Shirley said. Superstitious beliefs about the scales having medicinal properties are one of the main drivers of the animal's demise. Pangolins are unusual in an evolutionary sense; they are the only mammal that grows scales.

Shirley's work has been partly funded by a grant from the Pangolin Consortium of zoos and institutions in the United States, while the camera project was funded in part by the National Geographic Society. Kyler Abernathy of National Geographic designed the cameras, while Katie Schuler, head of production with Coral and Oak Studios, was a collaborator.

Pangolins are being raised successfully for the first time by the Brookfield Zoo near Chicago and a handful of other zoos. Conservationists estimate 1 million pangolins have been snatched from the wild and trafficked in the past decade -- equivalent to one pangolin every five minutes.

"Pangolins are being confiscated from smugglers alive, but they are usually dehydrated and stressed, and survival rates were very low," said Bill Ziegler, senior vice president of animal programs at the Chicago Zoological Society, which manages the Brookfield Zoo. "We want to create a self-sustaining population in North America. The situation is dire."

All pangolin species have been listed as protected by a leading global organization, the Convention on International Trade in Endangered Species, since 2016. Conservation groups' estimates vary widely about how many pangolins are killed each year -- from 10,000 to millions.

The International Union for Conservation of Nature says demand for African pangolins is rising because the animals have been wiped out in Asia due to growing economic affluence in nations like China and Vietnam. The pangolin is seen as a status symbol there. Deforestation also is eliminating critical habitat.

National Geographic reported one of the largest seizures on record in 2018, in Nigeria, of 14 metric tons of stockpiled scales -- representing thousands of animals.

Pangolins are rarely brought to the United States alive, but pangolin products are smuggled in, said Justin Miller, founder of the non-profit PangolinConservation.org in St. Augustine, Fla.

Miller said some people in Asian cultures are raised to believe myths about the pangolin beyond magical healing properties. Such beliefs include thinking the animals are raised on farms, their scales are cut off and regrow, and that they are numerous and not threatened -- all of which are false.

Miller, who has worked on public education efforts in Africa, said it is difficult to get people who are struggling to eat or survive to respect animal conservation.

The Brookfield Zoo is one of the only institutions where people can see pangolins on display occasionally. One of the trickiest things about keeping them is understanding how they breed, Ziegler said.

"Only a few years ago, people didn't even know the gestation period for pangolin," he said. "We know now it is from seven to eight months."

Other issues include show to keep them healthy, how to move them or immobilize them, and how to anesthetize them for surgery. Much time and money has been spent on finding out what they might eat besides live ants.

"We're trying to design care routines that will lead to getting them back out in the wild," Ziegler said.

U.S. News // 1 hour ago
U.S. job openings fall to lowest level in 21 months
Jan. 17 (UPI) -- Job openings in the United States in November fell to the lowest level in almost two years, aided by a surge of hiring and little turnover, the Labor Department said Friday.

U.S. News // 3 hours ago
Texas 'killer nurse' given life sentence for killing 2nd toddler in 1980s
Jan. 17 (UPI) -- Genene Jones, a former nurse convicted and imprisoned for killing a child in her care nearly 40 years ago, will now likely die in lockup after she pleaded guilty to the death of another toddler.

U.S. News // 4 hours ago
Minnesota -- not Iowa -- the 1st state to start 2020 primary voting
Jan. 17 (UPI) -- The first primary votes in the United States for the 2020 elections were cast Friday -- not in Iowa or New Hampshire, but Minnesota, which hasn't held such an event for nearly two decades.