Migrants hike up a hill after crossing the Suchiate River from Tecun Uman, Guatemala, to Ciudad Hidalgo, Mexico, on May 9. File Photo by Ariana Drehsler/UPI | License Photo

Sept. 24 (UPI) -- The Trump administration has ended its "catch and release" immigration policy due to the elevated number of migrants being detained at the border, officials said.

McAleenan said there are a record number of migrants being apprehended at the U.S.-Mexico border, with an estimated 144,000 detained in May alone. Of those, 72 percent were unaccompanied children or families, he said.

Going forward, migrant families that don't apply for asylum will be sent back, in collaboration with Central American governments, the administration said. Migrants seeking asylum will be held in Mexico under the Migrant Protection Protocols.

"With some humanitarian and medical exceptions, DHS will no longer be releasing family units from Border Patrol Stations into the interior," McAleenan said. "This means that for family units, the largest demographic by volume arriving at the border this year, the court-mandated practice of catch and release due to the inability of DHS to complete immigration proceedings with families detained together in custody -- will have been mitigated."

The administration signed an agreement with El Salvador last week to allow asylum seekers to request protection there as their case is processed.

The U.S. Supreme Court voted 7-2 this month affirming a rule that asylum-seeking migrants must first apply in whatever nation they first travel through before arriving in the United States. 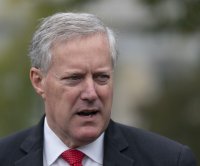 U.S. News // 8 hours ago
Abortion rights council calls on California to pay for out-of-state patients if Roe vs. Wade falls
Dec. 8 (UPI) -- A council made up of abortion rights and women's health advocates recommended Wednesday that California prepare to provide abortion access -- and funding -- to all Americans if the Supreme Court overturns Roe vs. Wade.