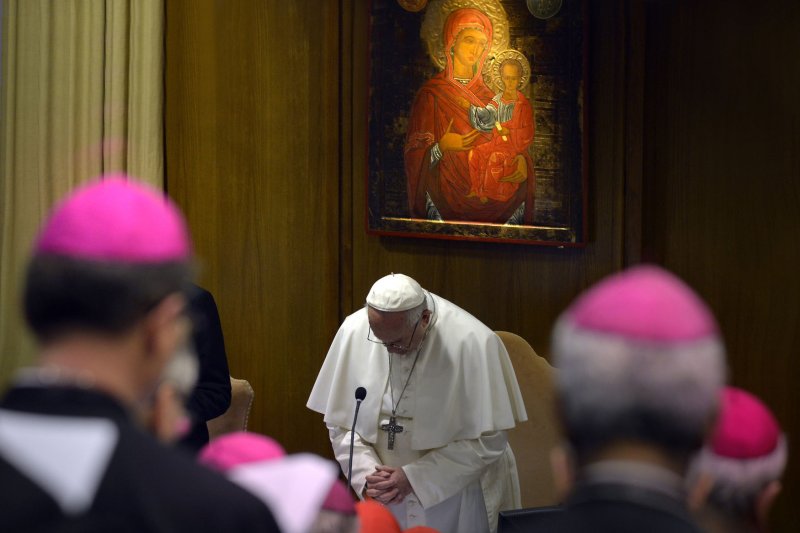 Pope Francis attends a session of The Protection Of Minors In The Church meeting in Vatican City on February 22 The Pope has called a summit of 190 Catholic Church leaders to combat the clergy sexual abuse scandal involving minors. File Photo by Galosi Spaziani/UPI | License Photo

State Sen. Jerry Hill of California and state Rep. Angela Romero of Utah want their states to join about a dozen others in treating members of the clergy the same as numerous other professions - including teachers, doctors and social workers - who are required to inform law enforcement when they learn a child has been abused.

In most states, clergy members are not mandated reporters if a penitent tells them about the abuse in a confession, according to the Child Welfare Information Gateway.

Hill and Romero argue the exemptions should be eliminated.

"My concern is not about the perpetrator; my concern is that children are safe," said Romero, D-Salt Lake City, whose bill is in the drafting stage.

Her legislation would not stop abusers from practicing their religion or violate their First Amendment rights, Romero said, because "they can still confess."

Opponents contend mandatory reporting would undermine religious freedom. The Religious Freedom Institute, which has fought Hill's legislation, says a bill requiring clergy to violate the seal of confession would encroach upon a core tenet of the Catholic Church's sacramental theology.

A coalition of religious leaders put together by the RFI, a nonprofit organization based in Washington, D.C., issued a statement in July saying the bill could worsen the abuse problem by discouraging confession and "its intended result -- a turning away from grave sin."

The interfaith coalition also notes that over the centuries, Catholic priests have accepted torture and death rather than disclose the names of confessors or the contents of the confessions.

"When the government attempts to interfere with the millennia-old teachings of a church, all of us are greatly concerned," the statement says. "Such a disregard for the beliefs of one community of faith puts all of us at risk. Today it is the Catholics. Tomorrow it could be another Christian community, Jews, or Muslims whose beliefs are targeted. We are united in saying 'no' to such interference."

Romero said cases of sexual abuse involving ecclesiastic leaders are covered up too often, which denies justice to the victims.

She is looking into what other states have done, including Texas, where the mandatory reporting law applies to members of the clergy.

Her bill will not target any specific religious institution or group, Romero said.

Jean Hill, government Liaison for the Catholic Diocese of Salt Lake City, said the church has no position on the legislation at this point because there is no text yet.

"We hope to meet with Rep. Romero to discuss her proposal," Jean Hill, who is no relation to Jerry Hill, said in an email. "Diocesan policy requires reporting to law enforcement by any person with reason to believe a child has been abused and any person who is truly penitent and seeks absolution for a heinous act such as abusing a child would be required to self-report to law enforcement as part of their reconciliation as well."

Officials of The Church of Jesus Christ of Latter-day Saints, the predominant religion in Utah, had no comment on Romero's proposal.

Earlier this year in California, Jerry Hill, D-San Mateo, introduced Senate Bill 360, which would have required clergy to report knowledge of child abuse or neglect, including information disclosed during penitential communications.

After being amended in Senate committee hearings, the bill would require disclosure only if the confession comes from another clergy member or a church co-worker of the clergy member hearing the confession. Although the Senate passed the bill with a 30-4 vote, Hill decided in July to place the legislation on hold because, he said, it did not have enough support to move on.

The senator said in a news release that he intends to continue to champion the bill.

"I strongly believe that for any institution, self-policing and self-investigation are not effective ways to combat alleged abuse," he said.

Judy Larson, vice president of the national board of the Survivors Network of Those Abused by Priests (SNAP), said dealing with a crime in an ecclesiastic way instead of reporting the offender "almost gives them permission to keep doing that."

"Predators count on the fact that nobody is going to tell and they're going to get away with it," said Larson, who also is SNAP's Utah representative.

Ryan McKnight, executive director of the nonprofit Truth & Transparency Foundation and one of the founders of MormonLeaks and FaithLeaks, said he and another member of the organization met with Hill's staff late last year to discuss removing the clergy exemption from the law. The foundation also sent an email to all Utah legislators last year urging them to approve the same change.

McKnight said about a dozen states have no clergy exemptions.

"I haven't heard reports of their religious freedoms being stripped in those states," he said. "There already is precedent in the United States for such laws."

Australian Catholic Church leaders last year rejected a proposal by the government to make priests legally responsible if admissions of guilt heard during confession are not reported to authorities, saying such a law would not make children safer.

The proposal stemmed from a five-year investigation into suspected widespread sexual abuse of children by priests and religious brothers in Australia.

The U.S. efforts come amid thousands of new abuse allegations, mostly against the Catholic Church, being investigated around the country.

U.S. News // 14 hours ago
No jackpot winners in Saturday's Powerball drawing, prize reaches $747 million
Feb. 5 (UPI) -- Nobody claimed the Powerball jackpot for the 33rd time in a row on Saturday, pushing the grand prize to $747 million ahead of Monday's drawing.