United Airlines to move its grounded 737 Max planes to Arizona

United Airlines will relocate its fleet of Boeing 737 Max aircraft to Arizona next month. Photo by Kent Nishimura/Pool/UPI | License Photo

The aircraft were grounded worldwide in March after two deadly crashes outside the United States. Similar problems were found in both crashes that killed 346 people. United has 14 of the 737 Max aircraft currently being stored in Los Angeles and Houston. The move was prompted by construction in Los Angeles and the hurricane season in Houston.

The move will be completed by mid-September, the airline said.

"United is fully committed to the safe movement of all our Max aircraft and we have clearance from the FAA to conduct these ferry flights," a United spokesperson said.

Arizona's desert makes an ideal spot to store aircraft because there's a lack of humidity and other weather concerns.

The timeline to bring the aircraft back into service has been pushed back. United hasn't scheduled any flights with the aircraft until November.

United is buying used 737s not subject to the grounding restriction to supplement its fleet for now.

Southwest Airlines, which has the largest 737 Max fleet, doesn't plan to fly the aircraft until 2020.

American Airlines lost $175 million due to the grounding.

U.S. News // 4 hours ago
COVID-19 rules enforced, Oval Office redesigned as Biden moves in to White House
Jan. 20 (UPI) -- The incoming Biden administration is making changes to how business as usual will be conducted in the White House, including enforcing stricter COVID-19 regulations compared to its Trump administration predecessor.

U.S. News // 18 hours ago
Biden signs executive orders on COVID-19, climate change, DACA
Jan. 20 (UPI) -- As one of his first acts as president, Joe Biden on Wednesday signed a flurry of executive orders that will set the tone for his new administration. 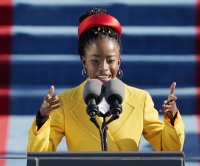 U.S. News // 9 hours ago
Man accused of crushing officer in doorway during Capitol riot arrested
Jan. 20 (UPI) -- Authorities arrested and charged a Connecticut man they said was responsible for crushing a Metropolitan Police officer in a doorway during the U.S. Capitol riot, federal prosecutors said Wednesday.