Iowa State Fair officials will be inspecting every pig that enters the grounds for signs of disease as part of their increased biosecurity measures to guard against African swine fever. Photo by Jessie Higgins/UPI

Aug. 9 (UPI) -- As presidential hopefuls flock to the Iowa State Fair this weekend, officials there will be on the lookout for an unseen intruder: African swine fever.

The state has increased its health inspection requirements for pigs brought to the fair, which began Thursday. The extra precautions are meant to guard against the deadly virus, which has decimated China's hog population and is currently sweeping across Asia and parts of Eastern Europe.

"It's not in the U.S. right now. It's not in the Western Hemisphere right now," said Dr. Dave Pyburn, the vice president of science and technology at the National Pork Board. "But if it were to get here, we don't want it to spread."

The disease was reported in China a year ago. It has since infected the entire country, wiping out 30 to 40 percent of its herd, analysts estimate. It is now spreading across Asia and into Europe.

Industry experts say the arrival of African swine fever in the United States could devastate the nation's pork industry. There is no treatment or vaccine for the disease -- which is nearly always deadly to hogs, but does not infect humans. That leaves only culling and biosecurity measures to contain an outbreak.

The U.S. Department of Agriculture is taking several steps to stop the disease from crossing the border by training dogs to sniff out pork smuggled in through luggage at airports and encouraging farms to institute more biosecurity measures.

That is exactly what Iowa State Fair officials are doing, Pyburn said.

"You have with exhibitions and shows the gathering of animals usually from a wide geographical area," said Paul Sundberg, the director of the Swine Health Information Center. "So you're bringing all these animals together in one spot.

"You have a real opportunity, if there is an outbreak of any disease where they are all gathered, to take that disease back to their original locations and move it from one place to another."

Any animal that shows signs of illness will not be allowed entry.

"All exhibitors are encouraged to practice good biosecurity both at the show and at home on the farm," Iowa State Veterinarian Dr. Jeff Kaisand said in a statement. "When exhibitors return home from the fair, they should disinfect their equipment, isolate animals that traveled to the show from the rest of the herd and monitor for signs of illness."

Elsewhere at the fair, more than 20 presidential candidates, all but one seeking the Democratic nomination, will be touring the grounds and making "soapbox" speeches that annually garner millions of visitors from the Midwest, the greater United States and other nations, according to the festival organizers.

It is six months ahead of the Iowa caucuses, but the fair has proved an important stepping stone for past successful candidates like Dwight Eisenhower and Donald Trump, and stumbling blocks for failed contenders like Joe Biden and Mitt Romney. 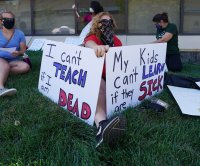 U.S. News // 10 hours ago
Pentagon orders probe of Syria airstrike that killed dozens
Nov. 29 (UPI) -- Defense Secretary Lloyd Austin has ordered an investigation into U.S. airstrikes into Syria in 2019 that resulted in scores of civilian deaths.

U.S. News // 11 hours ago
Theranos founder says she was abused by former COO and boyfriend
Nov. 29 (UPI) -- Elizabeth Holmes, the founder of blood-testing company Theranos, testified Monday that her boyfriend and the company's COO, Ramesh Balwani, sexually and emotionally abused her, as she faces fraud charges.

U.S. News // 13 hours ago
Justice Dept.: Gap reaches agreement to settle discrimination charges
Nov. 29 (UPI) -- Gap Inc. has reached a settlement to resolve federal charges that it discriminated against workers because of their immigration status, the Justice Department announced Monday.